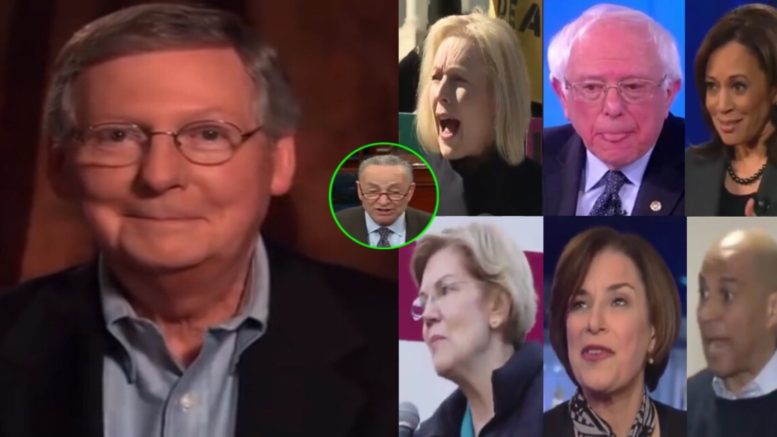 House Majority Leader Mitch McConnell (R-KY) said before the vote took place that it would be an opportunity for Americans to see how their Senators stood on the climate bill, which he labeled as a “destructive socialist daydream.”

Sen. McConnell foiled Democrats’ plot to vote “present” as a way for them to dodge showing their true stance on the Green New Deal. He said voting “present” equates to voting “no” on the plan.

Only 3 Democrat Senators and 1 Independent joined Republican forces to shoot down Ocasio-Cortez’s climate plan, which infamously calls for combating cow farts, the use of airplanes, and other so-called high carbon aspects of American society.

Several Democrats, who are running for 2020 presidential candidates, and who pandered to their far left radical base, pledged their support for the “Green New Deal.” Subsequently, they didn’t vote for the deal and Leader McConnell took to twitter exposing their true colors. (Video Below)

McConnell posted a video on twitter after the vote that displays clips of the Senators pushing for the deal.

Then, in bold letters across the screen it says “Voted Present” after each Senator that lied. (Video Below)

If they feel so strongly about their positions, why didn’t they vote yes?

(Related: Comedian Kat Timpf Absolutely Shreds AOC’s Latest Rant On The Green New Deal: ‘How About We Fly Around On Unicorns’)