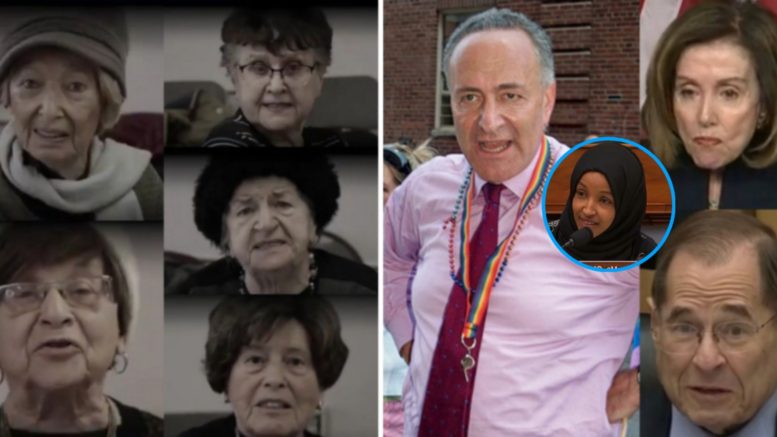 Holocaust survivors in America have reached their final straw with Democrats after seeing how they have handled repeated anti-Semitic remarks made by Rep. Ilhan Omar.

Instead of quickly condemning Omar’s latest remarks on Israel, Democrat leaders made excuses for her or remained quiet, hoping the problem would all fizzle away.

Despite the Democrat-controlled House passing an anti-hate resolution as a way to calm the fire surrounding Omar, holocaust survivors are disgusted by the lack of action and care seen out of party leaders.

In a video that has gone viral, holocaust survivors are seen voicing their anger towards Democrats. It begins with a female survivor claiming, “This is the most anti-Semitic Congress that we’ve ever had in the United States.” She continued, “How they would feel if their mother, their father, their wife, their children, all of their siblings have been gassed?”

Another female survivor in the video said she has voted Democrat her entire life. After seeing how Democrats are treating anti-Semitism, she said, “In 2020, I will not be able to [vote Democrat], because of those three horrors, and about the Jews that we have in the Congress are not helping us and not standing up for us. So…goodbye Democrat party!” Video Below

Another female in the video slammed Rep. Nadler, who is Jewish, for caring more about impeaching Trump and then he does about standing up for the Jewish community.

The focus then turns to Democrat Senator Chuck Schumer, who is also Jewish, for remaining mum during the controversy. One of the ladies says, “Schumer, shame on you! You’re not opening your mouth for anything.”

Another survivor proclaims, “No matter how many enemies we’ll have, Israel is to be forever and ever.” The clip ends with phone numbers for the offices of House Speaker Nancy Pelosi and Senate Minority Leader Chuck Schumer. Video Below

A message to #Democrats about their #AntiSemitism from #Holocaust survivors pic.twitter.com/4JVAI39ViZ