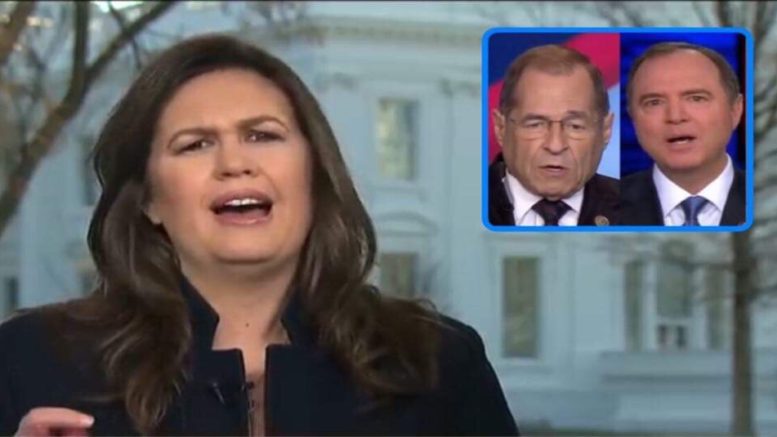 White House press secretary Sarah Huckabee Sanders interviewed Wednesday morning with “Fox and Friends” where she weighed in on Democrats and their latest push to investigate the President.

This comes amid Rep. Jerry Nadler (D-NY), who made a stunning political move on Monday, as he issued over 80 document requests on people tied directly to President Trump. Some of the people he is reported to have targeted include those who have already been questioned by either Congress or the Special Counsel. (Video Below)

President Trump blasted Democrats on Twitter after the announcement of Nadler’s fishing expedition and wrote, “Now that they realize the only Collusion with Russia was done by Crooked Hillary Clinton & the Democrats, Nadler, Schiff and the Dem heads of the Committees have gone stone cold CRAZY. 81 letter sent to innocent people to harass them. They won’t get ANYTHING done for our Country!

He continued, “The greatest overreach in the history of our Country. The Dems are obstructing justice and will not get anything done. A big, fat, fishing expedition desperately in search of a crime, when in fact the real crime is what the Dems are doing, and have done!” Further he added, “PRESIDENTIAL HARASSMENT!”

Sarah Sanders responded Wednesday and fired back, “The President is absolutely 100% correct. It’s an absolute embarrassment that members of Congress are using all of their time and resources into attacking the President, when they should be looking at trying to solve problems that this country has, like the President is doing.”

She continued, “They should follow his example of coming to work everyday  and looking for how they can help the American people, not how they can attack this President. It is absolutely outrageous that their number one job and and number one priority is try to beat every person that is supportive of this President– beat them down and attack them, instead of look for this expedition that you are seeing led by Chairman Nadler is truly an embarrassment to Congress. And it’s hurting our country, and it’s the opposite of what they were elected to do and the opposite of what we need them to do.” (Video Below)

Sarah further added that what Chairman Nadler is missing is that the first two years were not about oversite, rather they were about success.

“They were about delivering on what the President campaigned on and promised the American people he would do once he got elected, which is why he got elected in the first place.”

Then, the White House press secretary declared of the President, “He came to here to change the way that Washington works, and Chairman Nadler is doing exactly what every single person that voted for this President, 63 million Americans, [who] came out in a loud voice and said ‘we’re sick and tired of.’ We want something different. We want Donald Trump, and we like what he’s doing.” (Video Below)

Sanders further listed several accomplishments such as a booming economy, ISIS on the run, new trade deals, our enemies now fear us and our allies respect us, along with better relationships on the world stage that had been destroyed over the last 8 years.

“They want somebody that is actually doing something for them, not someone who is simply focused on attacking other people like we’re seeing from the Democrats. They have no message. They know that their entire party has been taken over and radicalized by a fringe group on the left and that is not going to play across the board. The only play they have to try and beat this President in 2020 is to attack him.” She concluded. (Video Below)