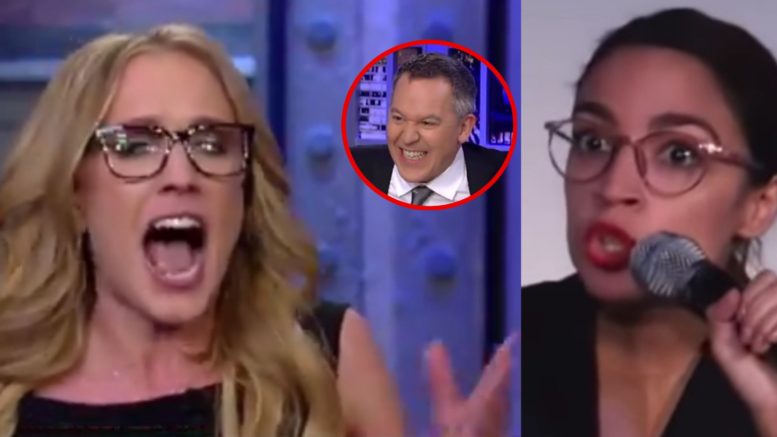 Comedian Kat Timpf joined Greg Gutfeld on his show and literally went ballistic when the subject of Alexandria Ocasio-Cortez was brought forth.

In a recent interview, Cortez ranted to critics of her Green New Deal that she’s “the boss” right now because no one else is taking initiative to come up with a plan to combat climate change and hers is the only one.

Kat Timpf spouted off on this particular statement made by Cortez and completely shredded this notion into pieces in a hilarious rant of her own.

Then citing Cortez calling herself “the boss,” Timpf said, “How are you “the boss” for coming up with a plan that doesn’t work? Are you sure that the Green New Deal is not, like, what you’re putting in your pipe and smoking every day?” Timpf mocked Cortez by coming up with three plans of her own that also don’t work and by doing so, she asked, “Does that make me the triple boss?” Video Below

She said, “How about we fly around on unicorns instead of airplanes? How about instead of gasoline, we use pixy dust we get from Tinkerbell? How about we get Harry Potter to come over and wizard away all of the emissions from the cow farts she’s so concerned about?”

Timpf then took matters personally as she defiantly said, “I don’t wanna do my laundry in a basin! I don’t wanna eat only lettuce and carrots like some kind of bunny!”

Bill Hemmer RIPS AOC Over Her ‘Concentration Camps’ Comparison: ‘Does She Not Owe Every Jew On The Planet An Apology?’