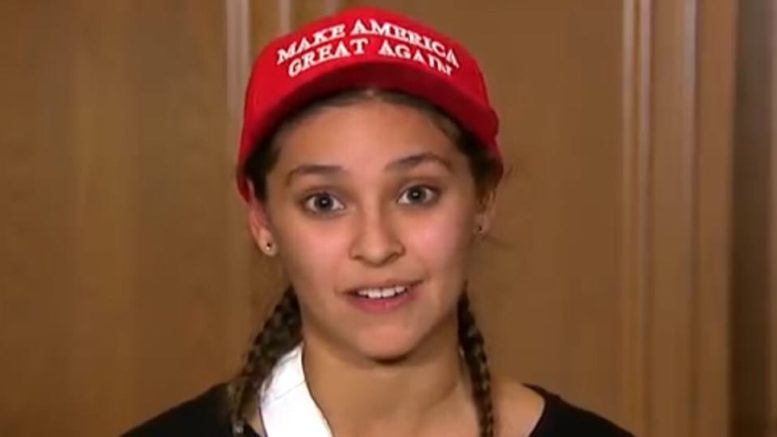 A California teenager is fighting for her right to wear a “Make America Great Again” hat at her high school.

Maddie Mueller, has been the subject of several news stories after her school banned her from wearing the signature red hat. She is a senior at Clovis North High School in Fresno, California. (Video Below)

Maddie Mueller joined host Laura Ingraham on Fox News Monday night where she spoke out and told her story of her school district discriminating against her political beliefs.

Maddie says she was just trying to show her pride in her country, but the school claimed she had violated the dress code.

Clovis North High School told Laura Ingraham in a statement, “It wasn’t a school hat or a hat from a school club or activity… our dress code is actually silent on ‘political’ attire because we don’t intend to position ourselves to be making subjective judgements about what is and isn’t political.”

“They say this has nothing to do with stifling your political beliefs? Do you believe that?” Ingraham asked Maddie. (Video Below)

“I would have to say I wholeheartedly disagree.” Maddie responded.

“What evidence do you have that the school is discriminating against your political beliefs?” Asked Ingraham.

“Currently on campus as of today, I just today… I saw four Hillary Clinton t shirts, one Obama shirt, a Bernie Sanders hat, and about seven LGBTQ rainbow flag hats on campus today.” Maddie added they were in classrooms. (Video Below)

Laura pointed out “it seems kids are encouraged to be kind of mini-activists, but if you’re a conservative activist, then you’re kind of a hater. That’s how the dominant culture sees you.” Why did you want to pick this fight, which is pretty brave to do– at most probably public schools in the country?” She asked.

“I chose to pick this particular battle because I ended up at the beginning of the first semester getting an internship with Devin Nunes and David Valadao during their midterms, and that’s when I really discovered my true passion for politics. And, I realized the school systems seemed to be trapped under the government’s thumb about what they’re supposed to teach, what’s acceptable, what’s acceptable to force down our throats in a sense. And, I realized that it’s not always the truth.” Maddie explained.

“So, I chose that, as a conservative, raised in a family that… my family was made through adoption. So, I was born in the pro-life army. And, I just decided that I felt like someone needed to take a stand, and someone needed to stand up, not just for Clovis North, not just for Clovis unified, but nationwide for the conservative and Christianity monitoring that’s going on- on campuses.” She added.

Maddie also revealed that she has to have her clothing approved before the disciplinary office and explained one in particular was a”support the blue” sweatshirt.

A Judge further made a statement on MAGA hats, “The hat is something that could invoke violence or invoke controversy. Then for the safety of the students, the school is within its legal right.”