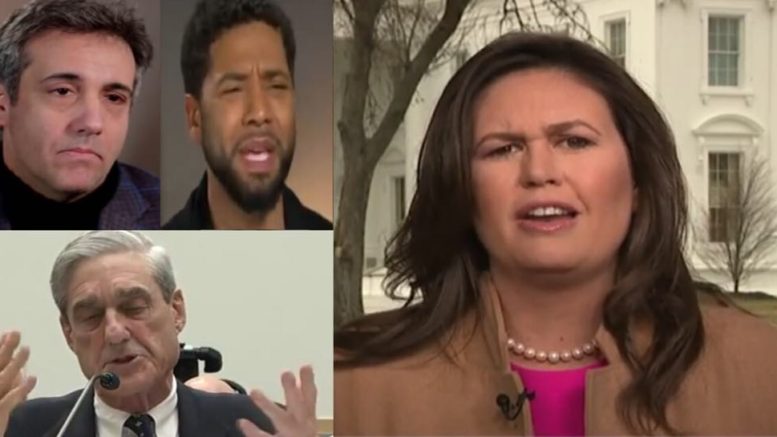 Press Secretary Sarah Huckabee Sanders joined “Fox and Friends” Friday morning where she weighed in on the several ranging topics of the week.

The Press Secretary reacted to the Jussie Smollett story, expectations for the second summit with Kim Jong Un, Syria, Michael Cohen’s Wednesday hearing, and the Mueller probe that is set to wrap up. (Video Below)

During her interview, Sanders was asked why President Trump put out a tweet Thursday that said, “@JussieSmollett – what about MAGA and the tens of millions of people you insulted with your racist and dangerous comments!? #MAGA.”

Sarah responded, “There were so many people, including leadership from the Democrat party, from Nancy Pelosi, Cory Booker, and a number of others, mostly those that are running for President– quickly came out and attacked the President and blamed the President. And in fact, as we learn more, it certainly seems like the only person to blame in this case is Smollett. And, it’s another sad example of people so quick to want to attack and come after this President– much like you saw with the Covington kids, and certainly with this case as well. And, the President is pushing back.”

When asked what she can expect with the “2.0 summit” next week with Kim Jong Un, the Press Secretary explained, “You can expect continued conversations between the two leaders. We’ve seen progress since the beginning of this administration.”

Sarah said that when President Trump took over, we were at great odds with North Korea. “We’re finally making progress. We’re not seeing missles being tested and flying over other countries. The remains are coming home, the hostages were released. This is another great step for the President and Chairman Kim to sit down and continue those conversations.” (Video Below)

Sarah noted that we’ve kept the sanctions on throughout the process of negations with North Korea and will remain- until the President feels it’s not necessary anymore.

“The only one setting high expectations is probably the media, because they are looking for reasons to attack this President. They hate the idea that he’s done so well on something that his predecessors couldn’t do anything on. He’s had a great success here, and the fact that were even able to sit down at the table, the fact that he’s able to do it again is, in itself, a big success.” She said.

Sanders further pointed out, “We’re continuing to make progress, but we’re certainly not nieve in the process, and the President is going to take things one step at a time. (Video Below)

The conversation then moved on to Mueller probe that is expected to wrap up soon.

When asked what Sarah is hearing at the White House from the Department of Justice about the probe, she said, “We are seeing the same reports that you are. It’s possible that this is coming to a conclusion, and his report will be finished. We feel good about the fact that what we’ve said all along for the last two years will be clear.”

“There was no collusion. The idea that President Trump needed to collude with Russia in order to beat Hillary Clinton is frankly laughable. He was an infinitely better candidate, with a better message, and he outworked her. That’s why he won. It has nothing to do with Russia or any other country for that matter. It had to do with the fact that he was simply better than she was.” Sarah said confidently.

When asked about Syria, Sanders explained that the Trump administration is leaving about 200 troops in Syria. “We’re in constant contact with our allies. We’re going to continue to be in communication with them. At the end of the day the President wants to bring our troops home, and he’s working towards that. He wants to do that in a safe and peaceful way and the best way possible to make sure that we have complete safety for our troops abroad.”

(Related: Catherine Herridge Emphasizes What To Expect If The Mueller Probe Is, In Fact, Winding Down)