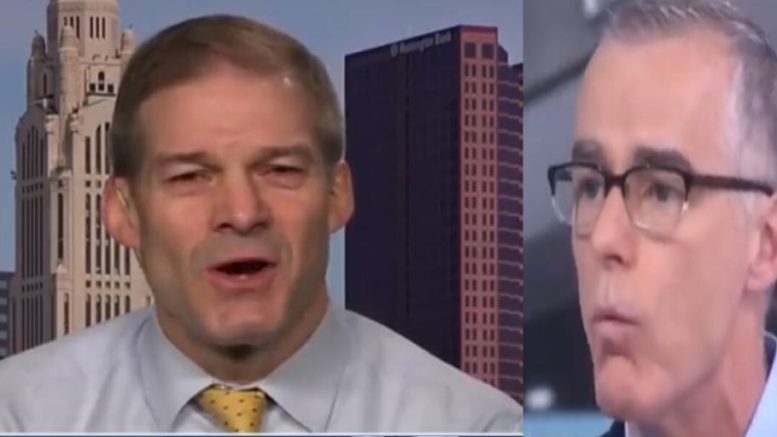 McCabe claimed he informed Congress of the bureau’s actions with regard to President Trump, but Jordan disagreed. (Video Below)

Rep. Jordan blasted McCabe as untrustworthy and said he was untruthful during an interview Tuesday with NBC’s “Today.”

Jordan said, “Well, I wasn’t informed or I would have objected. Remember even when all the way up to the day James Comey was fired, he told us when we deposed him that there was no evidence of any type of coordination between the Trump campaign and Russia. All the way up until May 9 of 2017.”

He continued, “Remember, they started this investigation in July of 2016. So the bottom line is: You can’t trust Andy McCabe.”

Jordan laid out why: “He’s lied three times under oath. He was fired at the FBI and he’s currently under investigation by the Justice Department. He and four other top people at the FBI in that critical eight days in May were trying to put together this scheme to go after the President and remove him from office. And that is scary because all of them are unelected, none of them ever faced the voters, and yet they were coordinating and trying to work on actually removing the president of the United States from office, which is scary to think about.” (Video Below)

Rep. Jordan doubled down  on how untrustworthy McCabe is, and he pointed out there are discrepancies between McCabe’s story of events and Deputy Attorney General Rod Rosenstein.

Jordan said, “Look, you can’t trust Andy McCabe. He tries to make himself out to be a boy scout. ’60 Minutes’ tried to make him look like that. You can’t trust him, but you’re right he is the third person who has told us that Rod Rosenstein was serious when he made the comments about wearing a wire and recording the president and looking to work with members of the cabinet to invoke the 25th amendment.”

“I think this just underscores just one important thing. We need both individuals, Andy McCabe, Rod Rosenstein, two different stories– you need them both under oath answering questions from Congress. Particularly, I would prefer the oversight committee where we can ask him questions. That’s how our system works. You figure out who’s telling the truth when you bring people in, put them under oath and ask them questions so the American people can see what really took place.” Jordan added.

(Related: Schiff Vows Not To Be ‘Intimidated’ By Trump, Gowdy Swipes Back: ‘I Just Wish Adam Would Be Intimidated By Facts’)

When asked if he thought McCabe was sincerely worried that Russia had influence on the President, Jordan responded, “I think all these people: Jim Comey- fired, Andy McCabe- fired, Jim Baker- Chief Counsel of the FBI- demoted then left. Lisa Page and Peter Strzok- both demoted then left and fired. These five people were the key people.” He added, “When Comey gets fired, those four individuals McCabe, Baker, Strzok and Page– they got this extreme bias against the President– there were working to remove him for office.”

“All I know is he was out to get the President and I think that’s what drove this whole thing in May after their buddy, Jim Comey, was fired. They were trying to figure out what they can do to go after the President of the United States.” Jordan declared.

(Related: Sarah Sanders Signals Crunch Time For Dems: ‘Will They Decide They Love Our Country More Than They Hate This President?’)

Alice Cooper RIPS Politicized Musicians: ‘You’re Telling Your Fans Not To Think For Themselves!’

Rep. Jordan On Trump’s Acquittal: It Was A Good Day For The Constitution & For The 74 Million Americans Who Voted For Trump