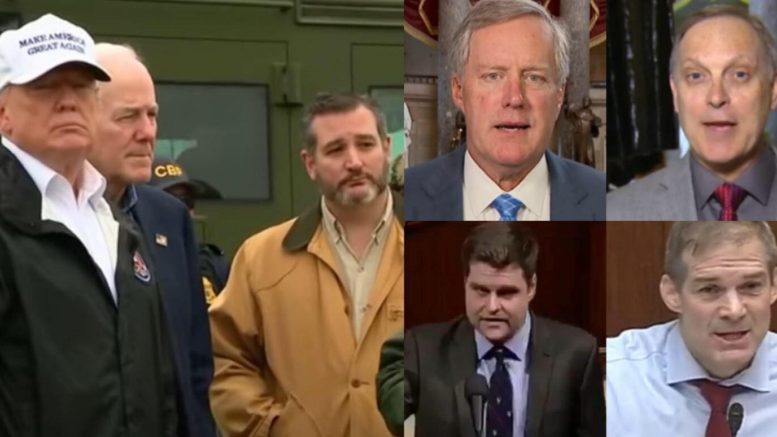 Conservative House members are urging President Trump to use executive power to build the wall along the southern border if he feels it is necessary to support the bipartisan border deal slated to be voted on Thursday evening.

In a letter to President Trump Reps. Andy Biggs (R-AZ), Matt Gaetz (R-FL), Jim Jordan (R-OH) and House Freedom Caucus Chairman Mark Meadows (R-NC) urging him to use his authority under Title X to access funds to build the wall.

In their letter, they blasted the agreement reached by senior lawmakers in both chambers and argued it does not provide enough funding to secure the border. The measure proposed includes $1.375 billion to construct a physical barrier, far lower than the $5.7 billion requested by the administration.

The letter reads, “Thank you for your leadership efforts to protect our border. The conference committee deal is bad. It will not secure the border and will allow criminally violent aliens to be released into our country. And, in fact, there may be additional problems with the proposed ‘deal.’”

The lawmakers urged President Trump to declare a national emergency to secure additional funds which would allow him to utilize emergency military construction authority and provide support for the counterdrug activities or activities to counter transnational organized crime by building the wall. (Continued Below)

The lawmakers continued, “If you feel the need to sign the legislation we also urge you to immediately use your authority pursuant to Title X, Sections 284 and 2808, to access funds to begin building a much-needed border wall.”

“We support your use of the authority delegated to you as President by the United States Congress to use federal funds to protect the American people.” The letter concluded.

The 1,159-page bill was released just before midnight on Wednesday. The House is slated to vote on it Thursday evening after its expected passage in the upper chamber. (Continued Below)

Rep. Matt Gaetz took to Twitter where he dropped off the letter.

Gaetz tweeted, “BREAKING: Sent a letter to @realDonaldTrump urging him to use his authority under Title X to access funds to #buildthewall; alongside @RepAndyBiggsAZ, @RepMarkMeadows, & @Jim_Jordan Americans deserve strong border security & Democrats have denied them that through this bad deal”

President Trump on Tuesday said, “Was just presented the concept and parameters of the Border Security Deal by hard working Senator Richard Shelby. Looking over all aspects knowing that this will be hooked up with lots of money from other sources. Will be getting almost $23 BILLION for Border Security. Regardless of Wall money, it is being built as we speak!”

He added, “I want to thank all Republicans for the work you have done in dealing with the Radical Left on Border Security. Not an easy task, but the Wall is being built and will be a great achievement and contributor toward life and safety within our Country!”

Thursday morning, the Commander in Chief tweeted, “Reviewing the funding bill with my team at the @WhiteHouse!”