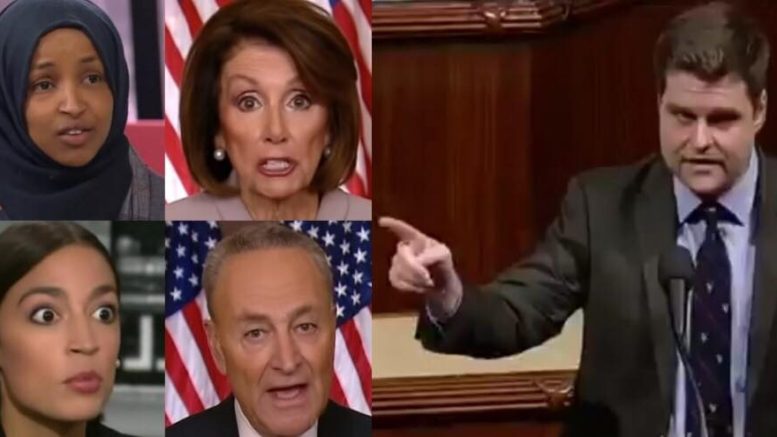 As the need to secure the U.S. southern border becomes more and more crucial, Republicans have stepped up to the plate in the fight along with President Trump.

Rep. Gaetz took to the House floor and declared, “Democrats don’t want us be able to lock up all the people that commit the crime of unlawful entry into the country.”

Talks among lawmakers negotiating on funding for border security faltered over the weekend as the dispute about Immigration and Customs Enforcement’s (ICE) ability to hold immigrants in detention centers emerged as the latest sticking point, reported The Hill.

Democrats want to cap the number of detention beds for immigrants picked up by ICE in other parts of the country away from the border at 16,000, an administration official said, down from 38,000. Republicans have pushed to exclude a number of immigrants convicted of a range of crimes from that cap, per The Hill.

The President wrote on Twitter Sunday, “The Democrats do not want us to detain, or send back, criminal aliens! This is a brand new demand. Crazy!” (Video Below)

Gaetz continued his argument on the House floor and said, “[Democrats] want to induce that illegal immigration!”

(Related: Sara Carter Puts America On Alert As She Reveals Weapons A Second Caravan Is Laced With)

“Well, Mr. Speaker, we want to stop it! We’re tired of negotiating when the goal posts keep moving, when the terms keep changing, and when Democrats do not appear sincere about securing our border.” Gaetz added.  (Video Below)

Rep. Gaetz wrote on Twitter along with his video, “The caravans that are forming and coming to our southern border aren’t shrinking, they’re growing. We need a wall, and we need it NOW. #BuildTheWall”

The caravans that are forming and coming to our southern border aren't shrinking, they're growing.

We need a wall, and we need it NOW. #BuildTheWall pic.twitter.com/QiFZo5qMPv

Kat Timpf: All You Have to Do Is Look at AOC’s French Bulldog to Know ‘She’s Full of Sh*t’

Biden On C0VID: ‘There Is No Federal Solution. This Gets Solved At The State Level’