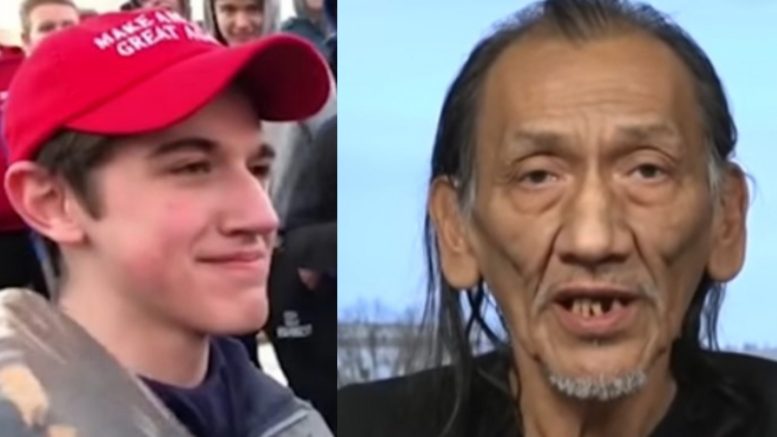 ﻿It’s been over three weeks since Covington Catholic High School student Nick Sandmann and his classmates wearing MAGA hats found themselves in the center  of a nation-wide smear campaign, where their life was threatened and reputation ruined.

Since then, Sandmann’s lawyers have been preparing massive defamation and libel lawsuits against several media sources, pundits, celebrities and others who they believe inflamed the smear campaign.

Two weeks following the incident, Sandmann’s lawyers sent legal letters to 54 people and entities who they believe had the biggest impact spreading the false narrative taken from a viral video and the account from Nathan Phillips, the Native American man seen pounding his drum just inches from Sandmann’s face. Phillips claimed Sandmann initially confronted him and got in his face, where later released video and accounts suggested the complete opposite happened.

Phillips is now at the target of a defamation lawsuit that Sandmann’s lawyers confirmed they are in the process of preparing. Sandmann’s lawyer, Lin Wood, broke this news via Twitter with an attached Life Site News article, in which Wood was interviewed.

In a tweet, Wood confirmed, “Nathan Phillips will be sued for his defamatory lies.” Video Below

Wood confirmed the Diocese of Covington is still investigating the matter and Sandmann was forced to miss 6 days of school as a result of the incident.

Wood said, “Nick was prohibited by the school from attending classes for 6 school days in the two weeks following the incident.”

He continued, “His return was only allowed on February 1 after his lawyers made clear to the school that we would not tolerate Nick being isolated and singled out based on specious claims that he first needed to give a statement to the school without his counsel in attendance and that there were ongoing security concerns (all other students had already been allowed to return to classes).”

Wood created a video that has since gone viral and shows the truth of what happened during the altercation in question. We leave you with that video.