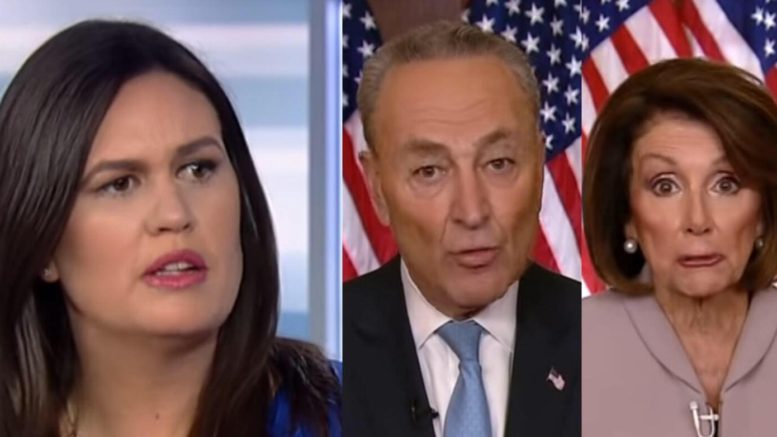 Sanders laid out exactly what the President is doing, and she touched on Tuesday night’s State of the Union address. (Video Below)

Hannity began the interview by explaining that the Democrats all pushed and voted for border security and the same measures under Obama. This is what President Trump is fighting for– nothing different.

“It’s all complete and total hypocrisy. I wish that I could say that I’m surprised, but I’m not. The Democrats have been for a number of things, not just on immigration, but across the board–whether it’s trade, infrastructure. And, the question is: will they decide at some point they love our country more than they hate this President, and will they be willing to actually focus on what they were elected to do; come here and solve problems?” The press secretary asked.

“They’re going to have to decide to work with the President in order in do that.” She said bluntly.

Hannity listed off a number of reason why the border should be security and laid down his reasons with cold-hard facts. (Video Below)

Hannity asked Sarah, “At some point don’t [Democrats] own the problems associated with the southern border crisis?”

“100 percent! They have to, because they are unwilling to actually fix it. And if you’re not willing to fix the problem, then you get to own the problem. And so far, we’ve seen no willingness by Speaker Pelosi and the Democrats to actually work with President and fix it.” Sara replied.

“The President has a job to do. He’s fulling his end of the bargain; it’s time for Congress to step up and do their part. He’s going to call on Congress and say, ‘look we can either work together and get great things done, or we can fight each other and get nothing done.’ Frankly the American people deserve better than that. That’s why you’re seeing the President lead time and time again and call on Democrats to actually work with him and get things done.” Sarah added.

(Related: Trump Fires Back After Schumer Pre-Criticizes The SOTU Speech: ‘He’s Just Upset That He Didn’t Win The Senate’)

(Related: Kellyanne Reveals A Tidbit Of What To Expect During Pres Trump’s State Of The Union Address)