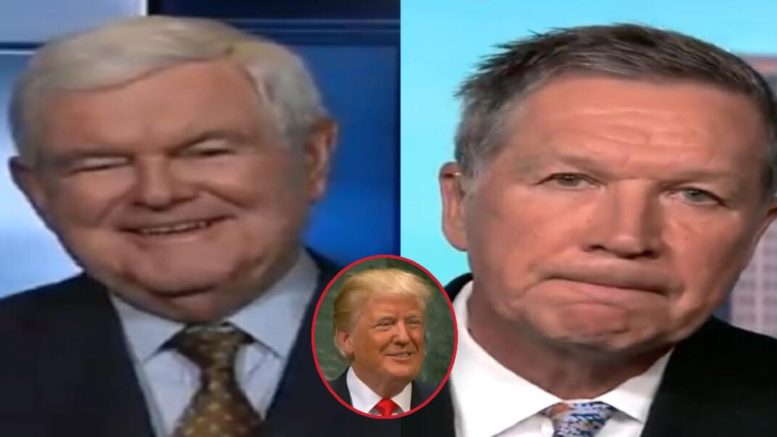 Former Republican House Speaker, Newt Gingrich took to Twitter Monday morning where he defended President Trump after a leak of the President’s private schedules were revealed.

Further, Gingrich punched back at “never trumpers” who sense President Trump is in trouble and dropped off Emerson College poll stats that shows President Trump squashes Governor Kasich by a wide margin.

Newt Gingrich defended President Trump in a series of tweets by comparing him to former British Prime Minister Winston Churchill, who took an hour or longer nap in the afternoon and continued working at night.

He wrote, “The distortions of the hate Trump movement are never more obvious than in the reaction to the President’s leaked schedule. The ignorance of history of the current elites is pathetic. Churchill slept late, worked late, took a nap every afternoon ( getting into his pajamas).”

Gingrich added, “More Presidential schedules (like all leaders) should be based on achievement not activity. Reagan spent every August at the ranch. Washingtonians were appalled. Reagan came back refreshed and refocused. It made him more effective. More to come.”

A White House source leaked almost every day of the president’s schedule for the past three months, and they were all published by Axios on February 3. They revealed that Trump usually wakes up before 6 a.m. and spends the first five hours in executive time, and that he passes the morning in his residence watching TV, reading the news and reacting by calling his aides, Congress members and friends. The many tweets Trump sends are often during his unstructured time, reported News Week. (Continued Below)

Gingrich next listed the President’s achievements and praised him for his focus.

He said, “We have continued economic growth,continued wage growth, continued job creation,progress in Chinese trade talks,trade agreement with Mexico and Canada, progress in strengthening NATO, progress in Venezuela,if Trump’s schedule leads to all this he should be applauded for his focus.”

Next Newt wrote, “For the never trumpers, anti-American leftists and trivialists who assume President Trump is in deep trouble you might look at the Emerson College poll in Iowa which shows President Trump gets 90% to 10% for Governor Kasich in a Republican contest. Lets see how they spin that.” (Continued Below)

The Poll Newt Gingrich is referring to can be found here at: [Emerson College]

The leak from Axios that Newt was referring to:

Related Article: Pres Trump Fires A Shot That Will Have Kasich Pouting In Fetal Position)