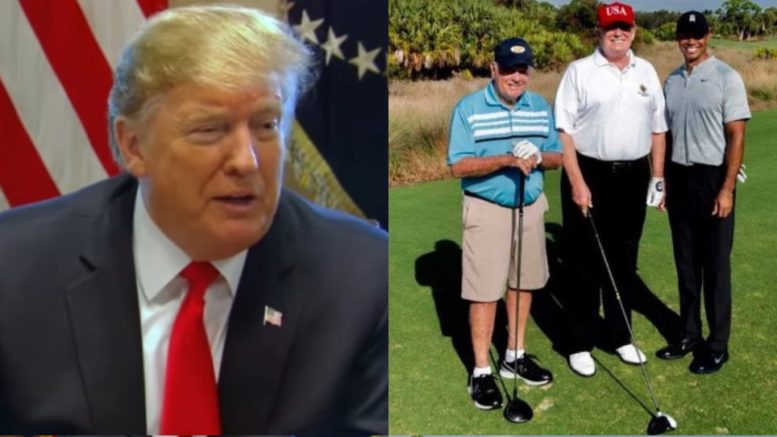 This weekend, President Trump traveled down to Florida to spend time and relax at his Mar-a-Lago Beach Resort.

This trip was unique compared to some of other ones as he got to golf with two living legends and arguably two of the best golfers ever: Tiger Woods and Jack Nicklaus.

The trio spent Saturday golfing at Trump National Golf Club in Jupiter, FL, which was actually designed by Jack Nicklaus.

It was definitely a round for the ages and, according to the President, “Everyone is wondering how Tiger played.” See Below

Woods has been making a comeback after having a stint of injuries, and posted some very encouraging scores in the 2018 season.

He trails the record of 18 major victories by only 4 and it just so happens to be Jack Nicklaus who holds the record, which made Saturday’s round of golf at Trump National that much more special.

Regarding his round of golf with Woods and Nicklaus, President Trump made the following statement: “Everyone is asking how Tiger played yesterday. The answer is Great! He was long, straight & putted fantastically well. He shot a 64. Tiger is back & will be winning Majors again! Not surprisingly, Jack also played really well. His putting is amazing! Jack & Tiger like each other.” See Below

We leave you with video of President Trump at the course with Tiger Woods and Jack Nicklaus.

Pelosi Reportedly ‘Wants To See Trump In Prison’, Lisa Boothe Fires Back: ‘This Is A Political Exercise & Charade’