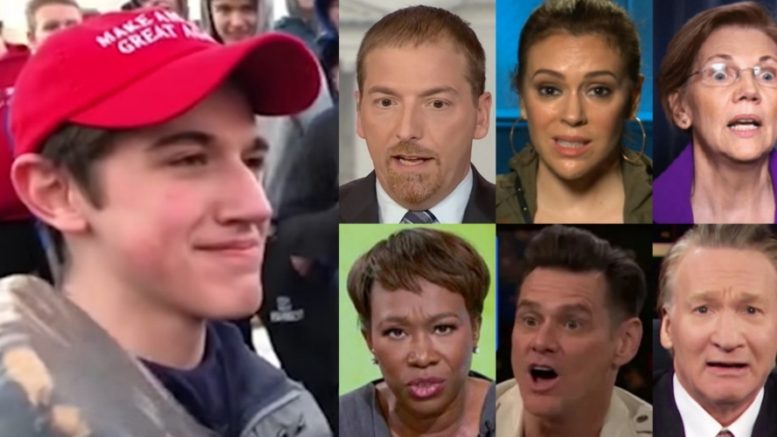 Two weeks ago, Covington Catholic High School student, Nick Sandmann, and his peers who were wearing MAGA hats found themselves as the target of a nation-wide smear campaign.

News sources, celebrities, pundits and more pushed a false narrative taken from a video, that showed Sandmann smirking while a man pounded a drum in his face.

Reports initially suggested Sandmann got in the man’s face, when later video showed it was the man who got in the face of the teen.

As a result, national uproar ensued that went as far as threats made against the teens’ lives, and some even saying teens should not be allowed to wear MAGA hats.

Since then, Sandmann and his family have lawyered up and are now seeking damages, as his life was harmed and reputation “permanently stained,” according to his lawyer Todd McMurtry.

According to Cincinnati Enquirer, Sandmann’s lawyers said they have sent legal letters to 54 organizations and people who they believe were primarily responsible for spreading false information about the teen and fueled the uproar.

This is the usual initial step in libel and defamation lawsuits, as per the Cincinnati Enquirer’s report. See List Below

Jeffries: Democrats Are “Committed” To Making The Case To Remove Trump “No Matter What It Takes”