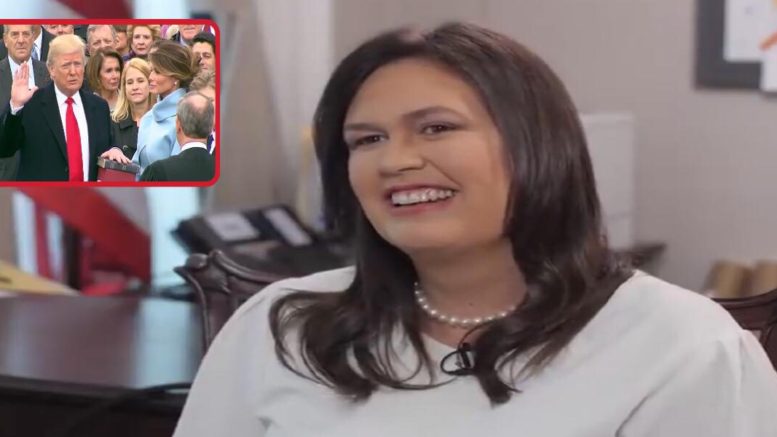 The Wednesday morning interview lasted nearly 20 minutes and touched on the issues of immigration, anti-Semitism, the morality of a border wall, persecuted Christians in Syria, the White House press briefings, the state of the Democratic Party, her faith and many other topics, per CBN News. (Video Below)

“I think God calls all of us to fill different roles at different times and I think that he wanted Donald Trump to become president. And that’s why he’s there, and I think he has done a tremendous job in supporting a lot of the things that people of faith really care about.” Sanders said.

“That’s why he’s there and I think he has done a tremendous job in supporting a lot of the things that people of faith really care about,” She added.

Trump has often courted the support of evangelical leaders, and many high-profile evangelicals have defended him despite criticism regarding his rhetoric on immigration, race and other subjects, reported The Hill. (Video Below)

Sanders was asked Wednesday about a pair of religion-based issues, including allegations from conservatives that freshmen Democratic Reps. Rashida Tlaib (D-MI) and Ilhan Omar  (D-MN) harbor anti-Semitic views. The two representatives have drawn criticism for their support of the boycott, divestment and sanctions (BDS) movement, which is critical of the Israeli government’s treatment of Palestinians, according to The Hill.

Sanders called the lawmakers’ comments “outrageous,” and slammed Democratic leaders for failing to promptly condemn the remarks. “I think it is outrageous that the leadership of Democrats haven’t called on these people to either take their comments back. They haven’t condemned them,” Sanders charged.

“Anytime somebody who’s not even associated with the President says something, the first thing is will you condemn. Will you say that this is terrible?” she asked. “Where’s the leadership on the Democrats’ side to call this out? It is unbelievable that this is going totally unchecked, totally off the radar of most of the mainstream media.” (Video Below)