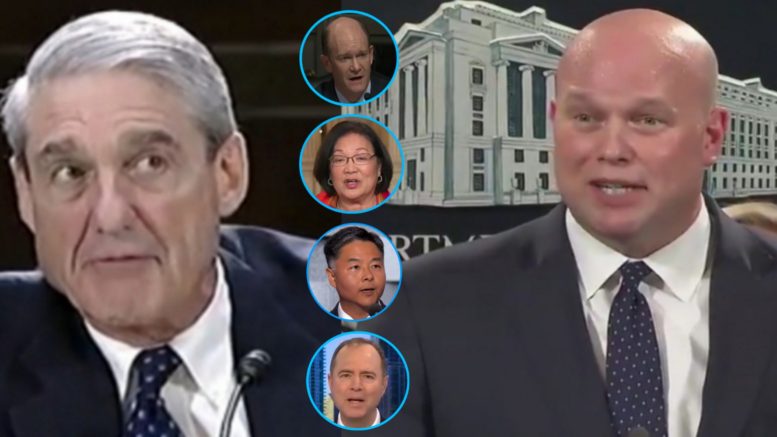 On Monday, Acting Attorney General Matt Whitaker made headlines and sent panic across the left by comments he made while addressing the press over indictments handed over to the Chinese telecommunications company Huawei.

Key leaders of the Democrat party were set into a frenzy, not by the indictments discussed by Whitaker, but by comments made by the Acting AG related to the Special Counsel’s investigation while taking questions.

Whitaker revealed that he has been “fully briefed” on Mueller’s probe and he suspects it’s “close to being completed.”

Although it was a simple, straightforward statement made by Whitaker, Democrats couldn’t help but to react out of panic due to the unknown of what his message could portray moving forward.

Senator Chris Coons was among the first Democrats to react to Whitaker’s comments. Not only did he provide a statement, but a photo of his reaction to Whitaker’s remarks began circulating on social media.

As per ZeroHedge, “Democratic Senator Chris Coons of Delaware said Whitaker’s statement that decisions made in the investigation would be reviewed is ‘chilling,’ adding he doesn’t have confidence that Whitaker will respect the independence of Mueller’s probe.”

Coons is quoted as saying, “I hope to be pleasantly surprised that he is not attempting to interfere in any way with the Mueller investigation or slow or prevent release of his report, but one could draw those inferences.”

Related Article: Actor Robert Davi Slaps Down MSM After The Latest Trump Hit Piece: ‘There Is No Russian Collusion!’

A photo has since circulated social media showing a Coons with a priceless reaction on his face after hearing Whitaker saying Mueller’s investigation is nearing the end. See Below

Democrat congressman Ted Lieu showed signs of the jitters as he tossed in his two cents on the matter. Here is his response:

Why is AG Whitaker commenting on an ongoing investigation? This seems inappropriate.

What if Mueller finds additional leads and evidence from Roger Stone? @MattWhitaker46 should not be rushing Mueller. The investigation must be done right, without political interference. https://t.co/ONcYgxQ68y

Of course, California Representative Adam Schiff couldn’t help chiming in on the matter. Here is his shrilling response:

An Acting Attorney General who refuses to follow the advice of ethics lawyers and recuse himself from an investigation in which he has shown a clear bias is the last person who should speak for the Special Counsel.

While the probe is ongoing, Mueller can speak for himself. https://t.co/7sy10bNcAF

Finally, it’s not a full Panic Party without a nervous reaction from Senator Mazie Hirono. Here is her response:

“I don’t think that Whitaker should even be the acting attorney general…He is a total Trump supporter and I’m very cautious about anything he has to say,” Dem Sen. @maziehirono responds to Acting AG Whitaker saying special counsel Mueller’s probe is “close to being completed." pic.twitter.com/jKfek4niBV

What will the Democrats do without a drawn-out Special Counsel investigation hovering over Trump’s Presidency?

In ending, we leave you with the infamous clip that is getting under the left’s skin:

NEW: Acting Attorney General Matt Whitaker says Mueller investigation "is, I think, close to being completed, and I hope that we can get the report from Director Mueller as soon as possible." https://t.co/NkJuIoh4fP pic.twitter.com/HL7XCGTohV