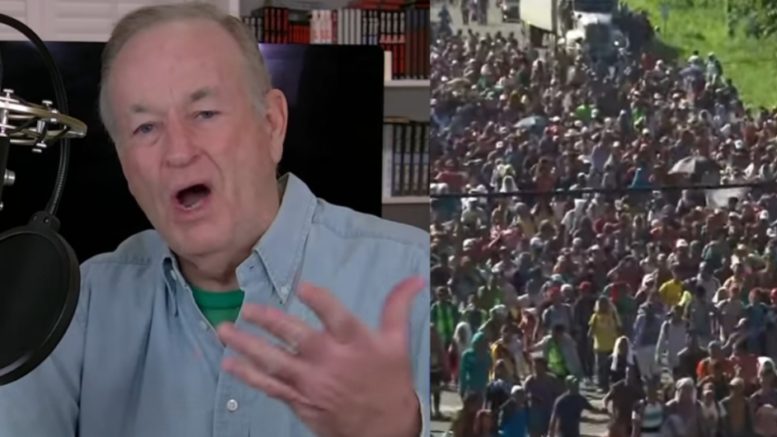 Bill O’Reilly took to the airwaves to vent on the dangers America is facing at the southern border shared with Mexico.

This all comes as Congress has been kicking around the issue of border security and the idea of funding a wall that has long been pressed by President Trump.

Republicans have been united on the prospects of a wall to cut down on crime, which rings to the tune of Trump’s new catch-phrase, “Build a Wall & Crime Will Fall!” While Democrats, however, have remained reluctant to support a wall.

In his podcast, O’Reilly sounded off on why a wall is highly necessary for the safety of America and backed up why he feels this way with cold-hard facts.

O’Reilly started off with some statistics that the Mexican government would rather not let the public know due to tourism. He said, “Last year,the murder rate in Mexico was up 33% over 2017, with about 35,000 people murdered in Mexico.”

He continued, “In addition to that, thousands of people disappeared because their bodies were buried, chopped up or whatever.” And he claims Mexican authorities don’t even know how many disappeared. With that said, O’Reilly estimates actually 60,000 to 70,000 people were killed, including 29 police officers and 113 politicians in 2018. Video Below

O’Reilly went on to unveil that the State Department issued six warnings to Americans to avoid six different areas of Mexico.

All of this and more supported his claim that “There is a war down there. And the war involves narcotics and people smuggling.”

On top of that, another caravan with an estimated 10,000 people is on its way up, to which O’Reilly reacted with, “And you’re telling me you don’t want a wall?” Video Below

Then after citing a town that is not protected from barriers, where “armed-to-the-teeth” illegal immigrants run rampant, O’Reilly sharpened his tone to get his point across.

Related Article: Bill O’Reilly Exhibits Why 2019 Will Be Bad For MSM: ‘They Killed The Goose [That Laid The Golden Egg]

He said, “President Trump’s gotta go on television. Buy the time…buy it! And he’s gotta say just what I said! There’s a war in this country–Mexico! And it’s spilling over to the United States.” Video Below