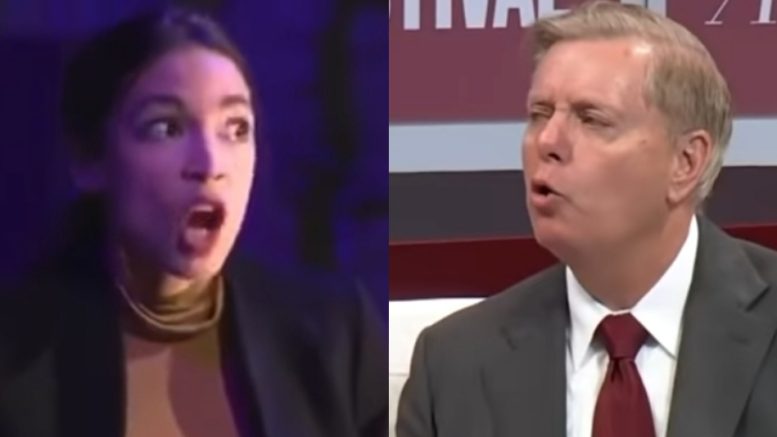 Her statement has since had a tough time being taken seriously, and instead has been continually ridiculed by her opposition. (Click Here For Sarah Sanders vs Cortez)

On Thursday, Senator Lindsey Graham became the latest conservative to rip Ocasio-Cortez over her wild notion after she went after Graham in a tweet.

Cortez attacked Graham for labeling Pelosi’s plan of cancelling the State of the Union as “a new low.”

She said, “According to [Lindsey Graham], the President failing to condemn neo-nazis, forcing thousands of federal workers to go to food pantries,& risking all their credit scores is whatever, but not letting the President march down the House Floor until we pay people first is ‘a new low.'”

Graham fired back. See Below

In a series of statements, Graham let Ocasio-Cortez know that she may have picked the wrong guy to mess with, and he put her in her place.

Graham hilariously replied with, “Let’s bury the hatchet and enjoy the next 12 years because they are going to be our last, right?”

He carried on and said, “Even worse news, [Ocasio-Cortez] and her new socialist colleagues seem hell-bent on making sure that our last 12 years will be spent as Venezuelan socialists, not Americans.” Continued Below

And he finished her off with a question for the ages. He asked: “Is it possible Rep. Ocasio-Cortez could be wrong about the demise of the planet in 12 years and the American people reject her socialist agenda in 2020? Stay tuned!”