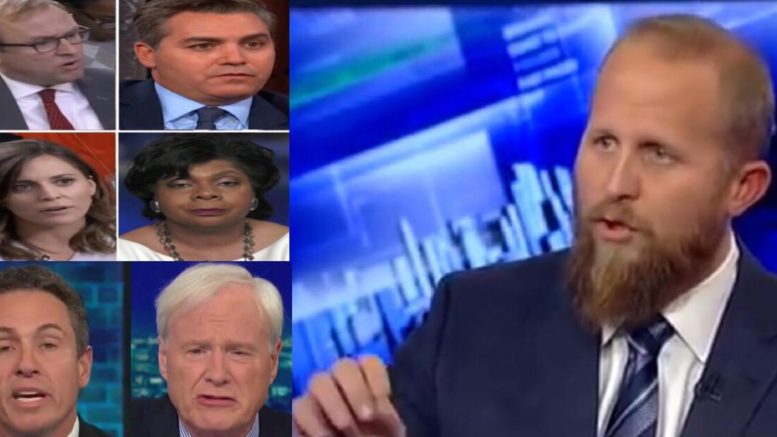 The media is treading on thin ice. Story after story is pure bias toward the sitting President of the United States. It’s another day of lies, slander, and “we got him now!” But in fact, the media keeps getting it wrong and losing more and more trust.

Brad Parscale, President Donald Trump’s 2020 campaign manager, is one of many who is fed up, and he came forward with a piece of advice for the media. (Video Below)

Last week the media ran rampant calling for the “impeachment of Trump” after they all cited left wing, garbage propaganda that was ultimately debunked. The article from Buzzfeed suggested President Trump directed Michael Cohen to lie to Congress about the Moscow Tower Project.

Peter Carr, a spokesperson for special counsel Robert Mueller’s office, released a statement disputing Buzzfeed‘s report that read, “Buzzfeed’s description of specific statements to the Special Counsel’s office and characterization of documents and testimony obtained by this office, regarding Michael Cohen’s Congressional testimony are not accurate.”

The media swept their “bombshell” story under the rug after being called out, and they moved on to the next “get Trump” story in a matter of a day. (Video Below)

In the blink of an eye, the media went rampant again. It came after a viral video of an interaction between Covington Catholic high school students and Native American Nathan Phillips.

Low and behold, the media left out key details and rushed to bash the high school students.

Why did they attack children? Because they were wearing MAGA hats. (Video Below)

Parscale took to Twitter Tuesday where he gave some much needed advice to the media.

He wrote, “The media has completely lost its reputation. It has became a self igniting fire because they all daydream of being Woodward and Bernstein.”

Parsale added, “Advice: Stop trying to be history making and just work on not sucking.”

Between 1972 and 1976, Bob Woodward and Carl Bernstein emerged as two of the most famous journalists in America and became forever identified as the reporters who broke the biggest story in American politics.

Beginning with the investigation of a “third-rate burglary” of the Democratic National Committee headquarters in the Watergate complex, Woodward and Bernstein uncovered a system of political “dirty tricks” and crimes that eventually led to indictments of forty White House and administration officials, and ultimately to the resignation of President Richard Nixon, reported the Harry Ransom Center.

Here’s the irony: In December, 2017, Bob Woodward and Carl Bernstein criticized the media at large for their hostile tone against the Trump administration.

“We oughtn’t be too provocative, which we sometimes are with a president who’s putting a lot of bait out there and sometimes we take the bait and get a little petty,” said Bernstein.

Woodward added, “The tone is a big issue here. In lots of reporting, particularly on television commentary, there’s a kind of self-righteousness and smugness and people kind of ridiculing the president. When we reported on Nixon, it was obviously a very different era but we did not adopt a tone of ridicule. The tone was, what are the facts?”

(Related Article: Parscale Forecasts A Bright 2020 For Trump: ‘The President Is Light Years Ahead Of Where We Were On Election Night’)

Judge Jeanine Discloses What She Found Incredibly Wrong With Judge Sullivan’s Behavior: ‘Something Is Going On That None Of Us Get’