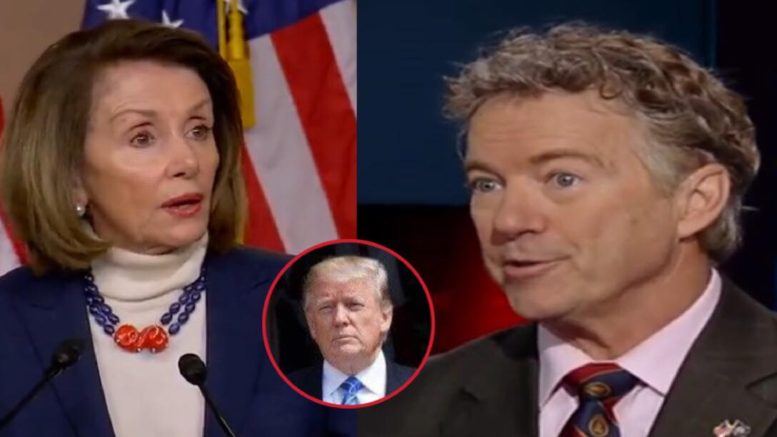 Speaker Nancy Pelosi’s plot to sabotage Trump’s State of the Union Address hilariously backfired when she was fact-checked by the Secret Service and the DHS.

Then, the Commander in Chief fired back at Pelosi and her colleagues when he canceled her foreign travel an hour before takeoff. He invited her to stay in DC and negotiate instead of letting 800,000 workers miss a second paycheck. That was a clear “checkmate” from the White House. (Video Below)

Senator Rand Paul (R-KY) responded to both Nancy Pelosi trying to postpone the President’s State of the Union Address and the President postponing Speaker Pelosi’s trip.

(Related Article: Trump Issues The Ultimate Payback To Pelosi After She Dis-Invites Him To SOTU Address; Denies Her Foreign Trip)

He wrote on Twitter, “Senator McConnell is in charge of the Senate. If Mrs. Pelosi refuses to allow the president to deliver the State of the Union in the House, I propose we move it to the Senate and make it happen!” (Video Below)

“It’s important that we try to open the government. The only way I see a way forward is for Speaker Pelosi and the President– and you can’t have a whole lot of compromise if she’s not in town to have conversations.” Sen. Rand Paul explained.

Sen. Rand Paul noted that the two have to come to the middle to make a deal, but explained however, that Speaker Pelosi is not willing to even negotiate.

Neil Cavuto chimed in, “She said the wall is immoral.”

Then, Rand doubled down on President Trump delivering his State of the Union address.

Cavuto asked, “Is it protocol for the Speaker to invite you to speak” Can they disinvite you?”

The Kentucky Senator replied, “I think he’s already been invited.” He added to the question of being disinvited, “That’s a good question, it’s never happened before.”

“What I’ve suggested is if they’re serious about it and they run the House and they won’t let the President come, the Senate should offer to have the State of the Union there.” He added, “That would be a fitting response to this. I think in the end they may back down.”

(Related Article: Bongino Sounds Off On The Irony Of Pelosi Dis-Inviting Trump To SOTU: ‘This Is Disgusting!’)

Rand Paul Drops The Mic: ‘I Don’t Know What’s Illegal About Trying to Build a Hotel in Russia’