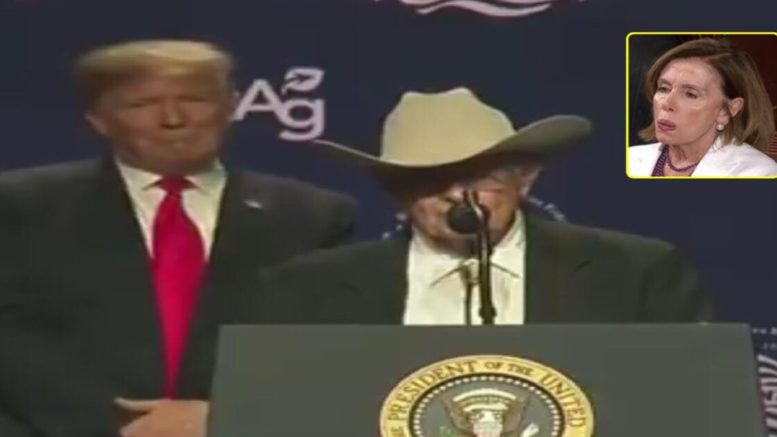 The President continued his fight for border security as the ongoing partial government shutdown over the border wall crisis carries on. (Video Below)

“I like the farmers. What can I do? I like farmers,” The President said in his opening remarks.

Trump addressed the trade deals and said he is negotiating on the farmers behalf, and he praised farmers for their work ethic and character.

During Trump’s speech he brought up a rancher who lives near the U.S. Mexico border and fully backs the President’s stance for border security. (Video Below)

The rancher, Jim, who owns a massive amount of land near the border said on stage, “Mr. President, we need a wall!” The crowd went wild and cheered at Jim’s remarks.

“I would say we need a wall all around the length of the border. We’ve got to stop the drug packers bringing drugs in– to poison our people.” He said.

Jim continued, “And, I would say to Speaker Pelosi, walls are not immoral. In fact, I’ve traveled around the world, and the biggest wall I’ve ever seen is around the Vatican. Now, you can’t tell me that the wonderful Priest and officials of the Roman Catholic church, including the Pope, are immoral. They have a wall. Why can’t we?” (Video Below)

President Trump tweeted before he took the stage, “Getting ready to go on stage at the #AFBF100 in New Orleans – packed house! I will try and match the great game played yesterday by the New Orleans Saints and their incredible QB, Drew Brees. People here are very excited by the team. Going on stage now!”

Trump brings up woke rancher Jim who owns a massive amount of land on the US-Mexico border:

Jim says: "Pelosi, walls are not immoral. I have traveled around the world. The biggest wall I've ever seen is around the Vatican. They have a wall. Why can't we?"