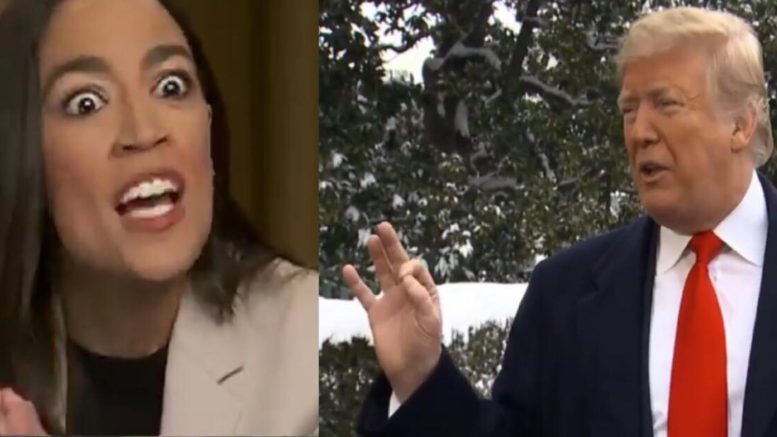 As President Trump was leaving for New Orleans, Louisiana on Monday to join farmers for the American Farm Bureau Federation’s 100th annual convention and a speech he briefly spoke with the press.

The President answered questions on a number of subjects related to border security, Democrats, and former FBI agents. (Video Below)

The President was asked by a reporter about Alexandria Ocasio-Cortez’s recent remarks where she called him a racist.

President Trump waved his hand in dismiss and responded, “Who cares?”

Cortez, triggered, took to Twitter to reply to the President’s remarks after he could care less what she thinks. (Video Below)

She wrote, “I bartended for *years* in New York City. I understand guys like this like the back of my hand. We got under his skin.

President Trump does not drink, so she doesn’t understand “guys” like that. In fact, he brought up the memory of his older brother Fred Trump while declaring a national public health emergency on opioids in 2017, and he shared the cautionary story of how alcoholism had robbed his brother of a successful life.

The President said he learned that from his brother, who died an alcoholic in 1981 at age 43. Trump described his brother as a “great guy, the best-looking guy with the best personality, much better than mine. But he had a problem. He had a problem with alcohol.” (Continued Below)

During the Kavanaugh confirmation, Trump also told reporters, “I’m not a drinker, I can honestly say I’ve never had a beer in my life. It’s one of my only good traits.” Trump joked that if he had been a drinker: “Can you imagine if I had, what a mess I’d be? I’d be the world’s worst.”

I bartended for *years* in New York City. I understand guys like this like the back of my hand.

We got under his skin 😂⬇️ https://t.co/SUXDVVY5tM

Twitterverse responded and here are a few MAGA bombs:

You are irrelevant. You are only good for people commenting on how clueless you sound most of the time. You are a one vote politician. There are hundreds of Congress members. You are one of many. Not a big deal, outside of social media

You never met a guy like Trump in your bar. The man doesn’t drink. 😏

Or maybe he just doesn’t care?

You respond to every piece of high-profile criticism that you get. Sounds to me like everyone else is getting under *your* skin, tbh. pic.twitter.com/WGFzjhD7bb

Stick to bartending… hopefully you were somewhat good at it.

If you understood guys like that, you wouldn’t have been working for tips.

You’d have owned the bar.

No you didn’t. You aren’t even a blip on his radar.

So, you are intentionally trying to provoke people and when they say, “Who cares”, you think you got under his skin. Nothing you ever say makes any sense at all.

How many non-drinkers did she get to “understand like the back of her hand” at the bar?

Must be so exhausting to play the victim card so often.

No, I don’t think you got under his skin. I think he just believes you are irrelevant and not really smart, both of which are very true.

Trump actually likes seeing you in Congress. It’s free advertising for 2020. When people listen to you speak it pushes them to vote straight Republican. #BuildTheDamnWall #ignoranceisbliss @realDonaldTrump

I’m curious how your bartending experience helps to understand guys who don’t drink.

Please run for president 2020, we need a laugh.

He waved his hand at me dismissively and said ‘who cares?’

That means he NOTICED me!”

But you are trying to treat all of America like they were drunken bar customers. That doesn’t sit well with the majority in this country. Maybe you should have stayed in that job.

Rep. Comer: Every Employee at Twitter Involved in Suppressing Hunter Biden Laptop Story will Have an Opportunity to Explain Their Actions