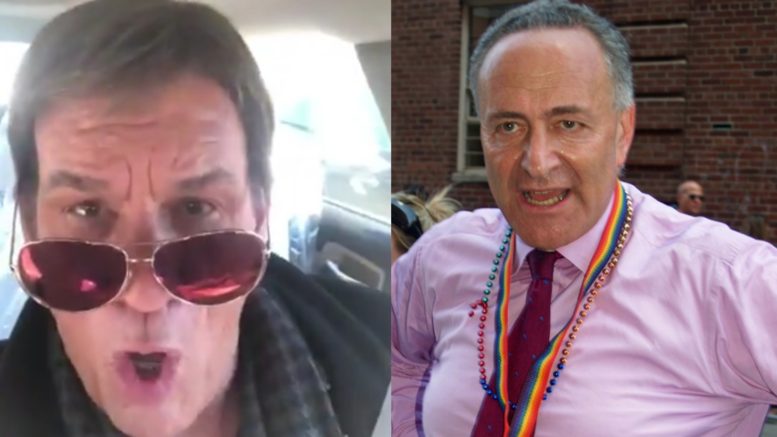 Actor Robert Davi has joined the ranks of the few celebrities who will not fall into the trap of the ever-plaguing liberal ideology that has swept through Hollywood.

Like actor James Woods and game show host Pat Sajak, Davi is sick and tired of seeing America being overtaken by those who have entered the country illegally and the policies that protect them.

After a rough 20 days of the government being shutdown as a direct result of the southern border crisis, Davi finally did his patriotic duty and slammed those he thinks are standing in the way of the security America needs.

There have been endless shares of video that clearly shows Schumer speaking in open support for a southern barrier to protect the United States from an immigration crisis.

And this is exactly what Davi used to backup his all-out pleading attack with Schumer as his focus. Video Below

In the video that has since gone viral on social media, Davi began by calling Schumer out for lying and demanding him to “VOTE FOR THE WALL!”

He said, “How many times are you going to sit there like a rotten corpse with a bold-faced lie on your face. I saw you sir! VOTE FOR THE WALL!”

He continued, “You voted for a wall, sir! Several years ago! So did Mrs. Pelosi! So did the Democrats when they wanted $50 billion dollars for border security.” Video Below

Davi then shifted his attack to CNN and other mainstream sources for not calling out Schumer’s flip-flop and accused them of gerrymandering the population.

To the American people pic.twitter.com/oEkouZBnYL