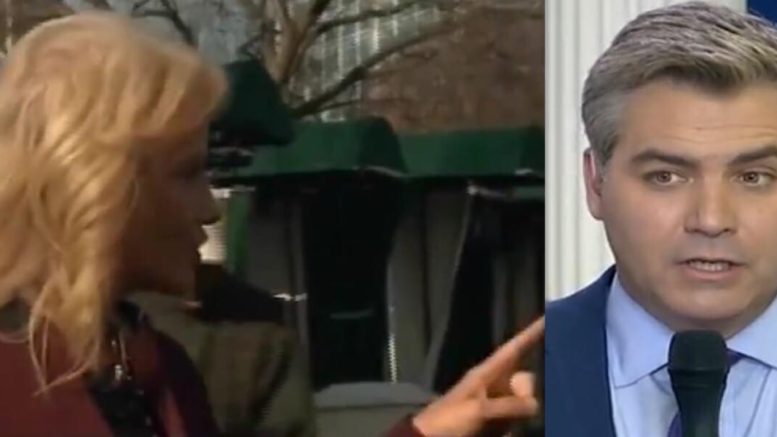 Counselor to the President, Kellyanne Conway, took questions from the press ahead of the President’s national address scheduled at 9 p.m. ET Tuesday night.

While answering questions, CNN’s Jim Acosta tried his luck. and ultimately he got shot down savagely by Conway. (Video Below)

Jim Acosta is off to a bad start for the new year.  After getting in trouble with the White House in November, he apparently hasn’t learned his lesson.

(Related Article: Alexa Gets Asked ‘Who Is Jim Acosta?’ The Response Is Priceless)

“Kellyanne, can you promise the president will tell the truth tonight?” Jim Acosta arrogantly asked Conway.

The Counselor to the President put Acosta directly in his place next roasting him. (Video Below)

“Yes, Jim. Do you promise that you will? The whole truth and nothing but the truth, so help you God?” Kellyanne rebutted. “Am I allowed to mention God to you?”

Acosta became triggered and said, “I’m not the one who has the alternative facts problem like you do. Will the President tell the truth?”

As Acosa kept running his mouth at Kellyanne, she fired back again and took him to the woodshed. (Video Below)

“By the way, this is why I’m one of the only people here who even gives you the time of day. And let me get back in your face…” Kellyanne said while pointing her finger at Acosta. “You’re such a smartass most of the time, and I know you want this to go viral.”

“A lot of these people don’t like you!” She declared. “But, let me just be respectful to media at large as I always am. I explained that that was additional information and facts, and I explained it many times. And, don’t you put it back in my face for all the corrections that your network needs to issue. I was on your network 25 or 26 times in 2018. I’m one of the last people here who even bothers to go on, and the disrespect that you showed to me personally, I’ll just look past.”

Acosta suddenly had a different change of heart and tried to call her “ma’am.”

Kellyanne shot back, “Don’t call me ‘ma’am to make it up.”

CNN’s Jim Acosta: “Kellyanne, can you promise the president will tell the truth tonight?”

Conway: “Yes, Jim. Do you promise that you will? … this is why I am one of the only people around here who even gives you the time of day…because you’re such a smartass most of the time” pic.twitter.com/8fZ1iycl9R

‘Apologists & Cheerleaders for the Regime’: College Freshman Calls Out Stelter During Conference

James Woods Issues a Brutal Message to Former Twitter Employees Purged from Musk’s Shakeup: ‘Eat S**t, Every One of You’

Beto O’Rourke Accuses Trump Of ‘Encouraging’ Violence, Candace Owens Swipes Back: ‘You Will Never Be President’