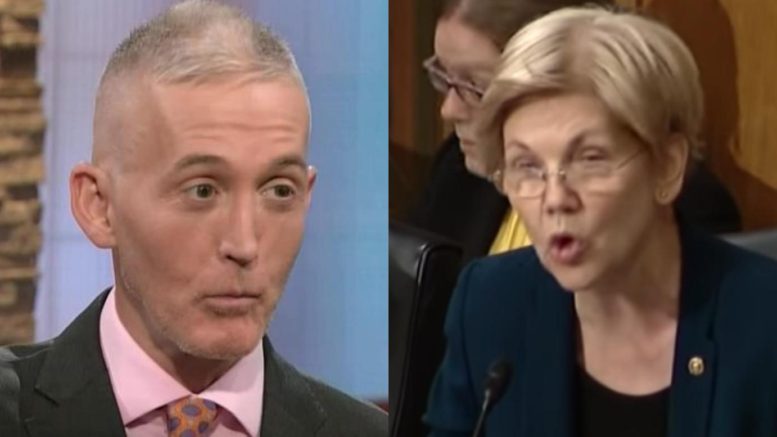 Gowdy’s rebuttal left Warren on the “do not call” list as he told the truth against her blatant lie. The American people quickly came to Gowdy’s defense. (More below.)

Gowdy has a silver tongue and no doubt has a clever way with words. Pocahontas Warren? Not so much.

Warren issued a tweet on Friday stating that Trey Gowdy “foamed at the mouth with power in Congress, then retired because he claimed he didn’t enjoy it.”

Gowdy quickly set her lie straight and publicly stated, “I’’m not lobbying. Not now. Or ever. Perhaps you were cracking open a beer when that was announced. Don’t mind your criticisms. Just be more sensitive to facts.”

The Daily Caller was quick to note that “Gowdy’s high profile also made him a frequent target of Democrats.” (More below.)

Warren lied then and she lying now.

There is no doubt that Elizabeth Warren lied about her ethnicity on her application to gain employment with Harvard University. That is not in dispute, as reported by Annie Linskey of the  Boston Globe.

Although Annie was trying to prove that Warren’s ethnicity was not taken into consideration for her job at Harvard, the big picture that Warren blatantly lied on her application seems to have completely escaped the pro-Warren crowd.

However, Warren’s habit of lying didn’t escape patriotic Americans who immediately jumped to the defense of Trey Gowdy. (More below.)

Two patriot women who share Elizabeth’s namesake although they clearly do not share her ideology said, “It’s about as clear as your Native American ancestry.”

And the other Elizabeth tweeted, “Ms. Warren, is it absolutely impossible for your to tell the TRUTH? First you’re an Indian! Now, you have made up information about Trey Gowdy!”

Trey was supported non-stop. Another American was exasperated at Warren’s lame attack and said, “Yes, “there aught to be a law” against leaving public service and going back to your private sector day job! . Really Senator? This is your attack?” (See tweets below.)

.@ewarren I’m not lobbying. Not now. Or ever. Perhaps you were cracking open a beer when that was announced. Don’t mind your criticisms. Just be more sensitive to facts.