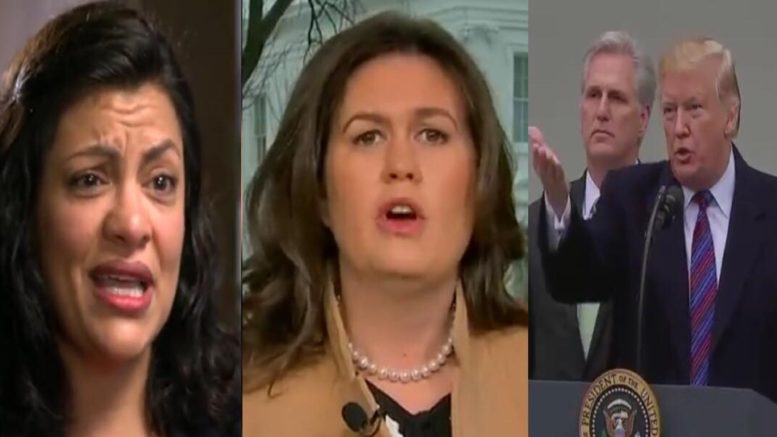 Hours after becoming a congresswoman, Tlaib promised to “impeach” Trump, telling an audience that she would “impeach the motherf****r.” (Videos Below)

Press Secretary Sarah Huckabee Sanders was asked about Rep. Rashida Tlaib remarks on “Fox & Friends” Friday morning and said confidently, “You will not impeach this president.” She added that Tlaib was trying to advance her own political career.

“You will not impeach this president when he had two of the most successful years any president had in modern history. The only reason they come after this president is because they know they can’t beat us, can’t beat him when it comes to policy debate. They have no solutions for America.” Sanders said.

The Press Secretary continued, “People are sick and tired of playing politics. That is not what America is looking for. That is not the goodness of our country. I hope some of these new faces that campaigned on being different and being a change will actually come here to work with the president, work for solutions, work to help the American people, not to help their own political careers.”

Further during a news conference at the White House in the Rose Garden, President Trump responded to Tlaib’s comments. (Videos Below)

When asked what he thought about Rep. Rashida Tlaib impeach comments, President Trump responded, “I thought her comments were disgraceful. This is a person I don’t know; I assume she’s new.”

“Using language like that in front of her son and whoever else was there, I thought that was a great dishonor to her and her family. I thought it was highly disrespect to the United States of America.” The President added. (Videos Below)

Further, reporters caught up with Rep. Rashida Tlaiband and asked her about the comments she made. Tlaib ran scared from the reporters when asked if she stood by her comments.

(Related Article: Trump Pushes Back At Haters Seeking To Impeach Him: ‘They Know They Can’t Win In 2020, Too Much Success!’)

Tomi Applauds Trump & Rips The Left’s Hysteria: ‘The Dems Hate The Fact That Our Armed Forces Love This President!’