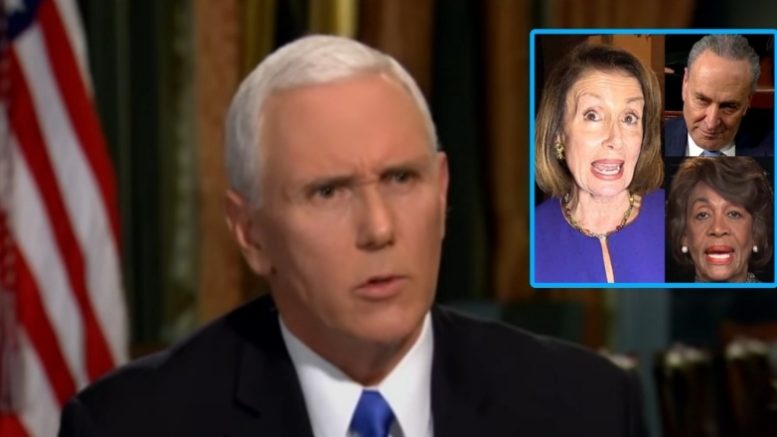 Vice President Mike Pence fights for the American people and their safety against the obstructionist Democrats. Photo credit to The Freedom Times compilation with screen shots.

Vice President Mike Pence joined  Fox News on the Tucker Carlson Tonight show on Thursday night in an exclusive interview. In a tense session, they discussed America’s border security and The Wall.

Since the Democrats are trying to copy President Trump’s hard stance and claim that they will not budge and give one cent to The Wall, VP Pence stepped in and let the Democrats know the monkey is squarely on their back. (Video below.)

“We will have no deal without a Wall.” – Vice President Mike Pence

Vice President Pence said the, “President has made it clear, we’re here to make a deal. But it’s a deal that’s going to result in achieving real gains on border security.”

VP Pence wasn’t messing around and added, “And you have no border security without the Wall. We will have no deal without a Wall.”

Later on he said, “The President has made it very clear, no wall, no deal.” (Video Below.)

The Vice President and President stayed in D.C. over the Christmas recess. Meanwhile, the Democrats went home and Nancy went to the Islands.

If you would like to see the Democrats fund The Wall and end drug and human trafficking and disallowing illegal aliens into our Country then contact your congressmen. Click here for quick information on USA.gov.

Related Article: Meadows Reveals Who Is Behind Stopping The Wall Funding: ‘Pelosi Is Driving Most Of The Negotiations’