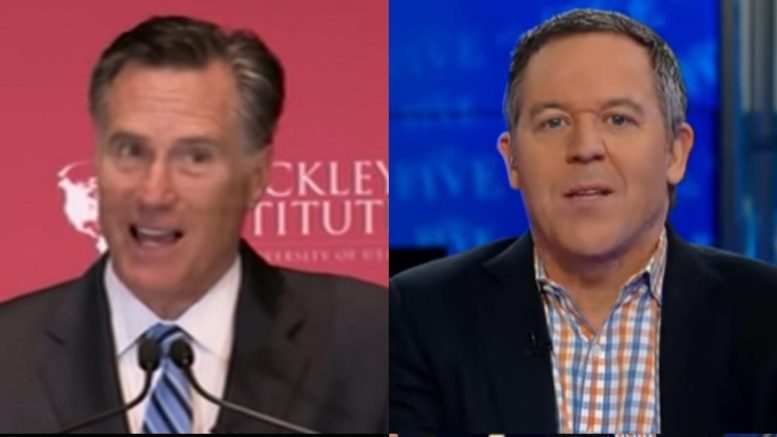 Greg Gutfeld weighs in on the Mitt Romney slam on Trump. Photo credit to The Freedom Times compilation with screen shots.

Greg Gutfeld opened a can of worms when he hosted the power team on Fox News’ The Five on Wednesday.

And since “The Five was the No. 1 cable news show” as reported by Ad Week it is definitely worth checking out. (Video below.)

“Mitt Romney: A guy so stiff you could iron a shirt on him.” – Greg Gutfeld

With smart and funny commentators, the audience is informed in a very entertaining way. During this segment Dan Bongino, former Secret Service agent and Marie Harve, former aide for John Kerry were guests. And Jesse Waters and Kennedy were there from Fox News as Greg hosted.

They discussed a variety of topics; however, the recent event of Mitt Romney’s slam on President Trump in his Washington Post op-ed was first out of the gate.

Hilariously, Gutfeld continued, he said, “If the definition of insanity is complaining about something that will never change, Mitt’s finally made it to the loony bin.” (Video below.)

“President Trump is a result of Mitt Romney’s failure.”  – Kennedy

Greg said Mitt is still mad about losing the election. “And the Washington Post and CNN will let him cry on their shoulder as long as it’s done in public,” Greg said. “And as long as he pays for the dry cleaning,” Gutfeld added with a bit of snark.

“It’s tempting for Mitt. It feels good to get hugs from a media that once branded you a sexist bully, who hurts dogs and kept women in binders,” Greg reminded the panel. He said, “But this attention is just a strange new respect that will be gone by tomorrow.”

“The media may pretend to like you because you hate Trump but they’re just using you,” Greg looked into the camera and spoke directly to Mitt. “So that glow you feel from the left? It isn’t true love…it’s a bug zapper.“ (Video below.)

WATCH Gutfeld tell Mitt how it is with the leftist media.

Greg Gutfeld On Kamala Harris: “Willing To Crush Kavanaugh & Biden, But When The Door Opens Up For Power, That All Goes Out The Window”