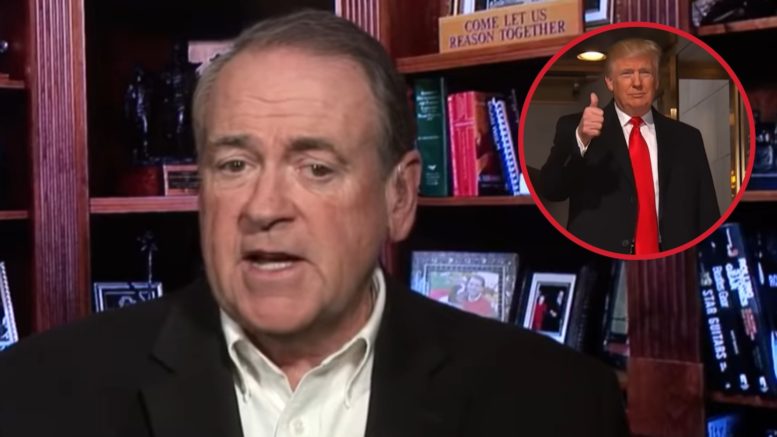 Julie Banderas filled in for Martha MacCallum on Fox News and Mike Huckabee joined her to discuss the Trump administration’s biggest achievements for 2018.

President Trump, the American people and the powerful America First agenda has been an overall success! And Mike Huckabee told us why.

Julie introduced Huckabee and said the Trump administration has had many BIG accomplishments in 2018. She said, “from getting Supreme Court Justice Brett Kavanaugh on the bench to soaring incomes for the middle class to confronting China.”

Additionally she stated, “2018 has been and seen several BIG WINS for President Trump,” as reported by Real Clear Politics. RCP listed other accomplishments like, the  U.S.-Mexico-Canada trade deal, ending the Iran nuclear deal and moving the U.S. Embassy to Jerusalem.

Julie asked Mike Huckabee what he thought the one biggest win was? Jokingly, Huckabee replied, “I think that he survived the onslaught of the press. And the Democratic party….who were relentless in going after him every single day.”

He continued, “and gave him no quarter – whatsoever – in terms of even acknowledging his accomplishments,” the former Arkansa Governor said. “But in terms of the list, I think the most significant is the historic levels of employment for minorities.”

So here’s the big question, Julie. …if he’s a racist and he’s doing more for people of color in their jobs and in their income than any President has ever done,” Huckabee quipped, “He is terrible as a racist! He is a failure as a racist! Because he’s really doing things that are lifting up people of color.”

Related Article: Mike Huckabee Issues A Plan To Work Out A Wall Deal With Pelosi In 15 Minutes