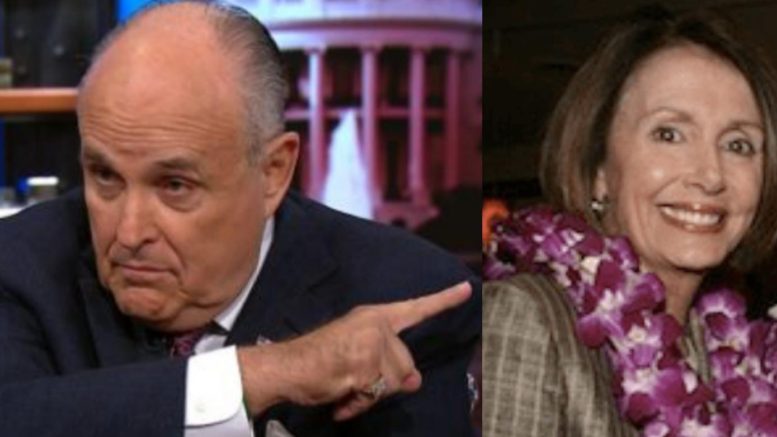 Rudy Giuliani tweets the hypocrisy of Nancy Pelosi and other Democrats who had voted for border security previously. Photo credit to The Freedom Times compilation with CNN Screen Grab, Hawaii Reporter.

Nancy Pelosi (D-CA), future speaker of the House of Representatives with the 116th Congress will have to do better than running off to a Pacific island in the middle of negotiations for the American people.

During the partial Government shutdown, Nancy Pelosi (D-CA) was discovered frolicking in Kona, Hawaii. (Video below.)

Democrats are obstruction strategists despite the will of the American people.

Peter Doocy with Fox News reported, after Nancy “left the White House hanging,” she was “spotted, five time zones away from the House in Hawaii,” while our Southern border remains insecure as she suns herself on vacation.

Representative Peter King (R-NY) weighed in about the lack of concern on Nancy’s part and said, “House democrats are in a bit of a bind.”

“I don’t think Nancy Pelosi wants to put any offer on the table until she’s elected speaker,” King continued. The House votes on the Speaker on January 3rd, 2019.

Meanwhile, fellow New Yorker, Rudy Giuliani weighed in too on twitter and pointed to the hypocrisy of the left. (Video below.)

Rudy Giuliani tells it like it is because…previous voting records matter.

“President Trump working for us in DC while Dem leaders vacationing for themselves,” the former Mayor of New York tweeted. “What hypocrites!” Guliani tweeted in disgust after he heard where Pelosi was found.

Rudy added, “Almost all of them favored a wall in the past; now that President Trump supports it it’s become “immoral,” making the Democratic hypocrisy reveal itself for the world to see.

President Trump working for us in DC while Dem leaders vacationing for themselves. What hypocrites! Almost all of them favored a wall in the past; now that President Trump supports it it’s become “immoral.”

Terrence Williams Levels Snoop Over His F-Trump Rant: ‘Where Was You When Obama Did The Government Shutdown?’