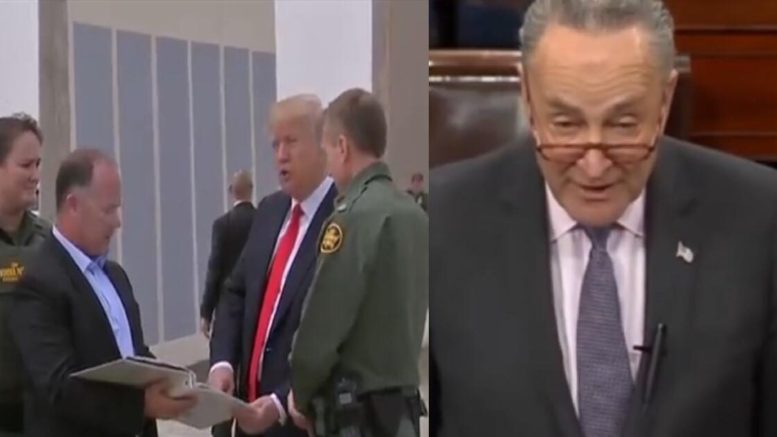 Is it any wonder why many are running far away from the democrat party? One could simply argue that democrats have shifted their party too far to left, leaving several of their dedicated life long voters in the wind, to sell their ideologies to a much younger, misinformed generation.

This has led to confusing the base, dividing the party, and giving off an impression of socialism, racial and gender identities as the new norm. (Videos Below)

What’s more bizarre is that the new party of followers of Ocasio Cortez and Bernie Sanders’ “socialist left” ideas have become so unhinged that when President Trump or Republicans put forward for the good of the country, it’s an automatic “no” from the resistance.

Many democratic lawmakers have taken note of their bases far left radical shift and are using it to fuel the fire and pander for votes.

If President Trump says it, then like clockwork, democrats open their mouths to automatically cry and resist it. Everything is offensive, racist, and wrong to the radical, unhinged left.

Fortunately, history does not erase itself, nor does the internet. (Videos Below)

On Saturday, Senate minority leader, Chuck Schumer (D-NY), not only exposed himself as the hypocrite and phony he is, but also the anti-American he has disturbingly become.

Schumer said the President’s proposal for the border wall, which was key to his election campaign, would “never” pass a vote.

“President Trump, if you want to open the government, you must abandon the wall, plain and simple,” he said. (Videos Below)

Schumer also said Democrats supported proposals for $1.3 billion for border security “as long as they don’t include funding for the wall.”

“The Trump shutdown is not about border security,” he told the floor of the Senate. “It’s because President Trump is demanding billions of dollars for an expensive, ineffective wall that the majority of Americans don’t support.

“It will never pass the Senate, not today, not next week, not next year.” He added.

What happened? Schumer was for securing the border, but now he plays politics.

In a speech in 2009, Schumer expressed his views against illegal immigration that sounds strikingly similar to what President Trump has said since 2015.

Schumer also called for significant increases in infrastructure, technology and border personnel to achieve “operational control of our borders,” in addition to an expansion of the E-Verify program to disincentivize illegal immigrants coming to the U.S. for jobs, reported Fox News.

“When we use phrases like ‘undocumented workers,’ we convey a message to the American people that their government is not serious about combating illegal immigration, which the American people overwhelmingly oppose. If you don’t think it’s illegal, you’re not going to say it. I think it is illegal and wrong and we have to change it.” Schumer said.

In 2013 Schumer tweeted, “We crack down on illegal immigration by securing the border & using Everify to stop companies from hiring illegal immigrants”

Chuck Schumer the hypocrite on Saturday:

However, President Trump isn’t afraid to expose what Schumer and his hypocrite friends have said in the past:

As a senator, Barack Obama once offered measured praise for the border control legislation that would become the basis for one of Donald Trump’s first acts as president.

“The bill before us will certainly do some good,” Obama said on the Senate floor in October 2006. He praised the legislation, saying it would provide “better fences and better security along our borders” and would “help stem some of the tide of illegal immigration in this country.”

Obama was talking about the Secure Fence Act of 2006, legislation authorizing a barrier along the southern border passed into law with the support of 26 Democratic senators including party leaders like Hillary Clinton, Joe Biden, and Chuck Schumer, reported Boston Globe.

Schumer does not care about the safety of our country and is at fault for the government shutdown.

He now cares more about open borders, funding and harboring illegals, and pandering for their votes. His hatred for America and President Trump is revealed but more importantly, beyond sickening.

History doesn’t forget what Chuck use to stand for.