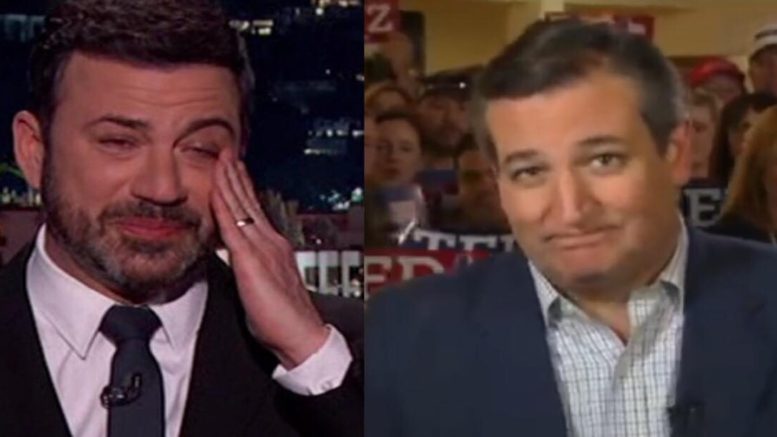 Sen. Ted Cruz (R-TX) took to Twitter Wednesday where he dropped a nuke on “comedian” Jimmy Kimmel in response to a video Kimmel posted.

The skit features Billy Crystal as God and Dave Grohl as the Devil. (Video Below)

In the video Kimmel posted, God and the devil fight over who gets Sen. Ted Cruz.

The devil ends up with him after losing a game of rock, paper, scissors.

Cruz hit back at Kimmel on Twitter and wrote, “Jimmy’s feelings are still hurt that I kicked his a** at hoops.”

The Texas Senator referenced his 11-9 victory over Kimmel in their one-on-one game of basketball the two had in June after Kimmel likened Cruz to a “blobfish” and insulted his love of the Houston Rockets, Town Hall reports.   (Video Below)

Cruz and Kimmel donated $10,000 each to charity after their game in June, further raising $80,000. Cruz donated to Generation One Texas, and Kimmel gave to the Texas Children’s Hospital.

However, after Kimmel’s stunt in with the new video he posted, Sen. Ted Cruz responded, writing on Twitter, “Really getting into the Christmas spirit, Jimmy Kimmel just aired a skit with “God & Satan” arguing and eventually deciding that I should go to Hell. It’s almost as if Jimmy’s feelings are still hurt that I kicked his ass at hoops….” (Video Below)