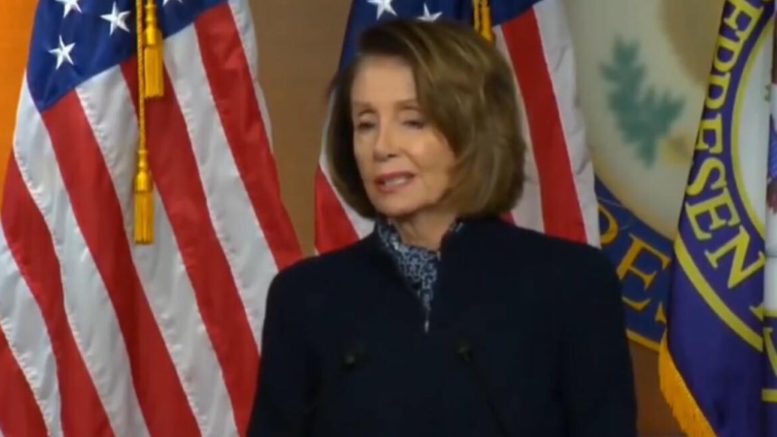 House Minority Leader Nancy Pelosi, (D-CA), revealed during a press conference on Thursday, that she will not negotiate border wall funding with the President.

Instead, she indicated to reporters that she would rather keep the “government closed forever” than send a bill to President Trump’s desk. (Videos Below)

During her press conference, Nancy Pelosi said she is not budging to fund the wall.

“We’re not going for the 5 billion dollars for the wall. We simply are not.”

When asked why President Trump would sign a Democratic bill that doesn’t include wall funding, Pelosi responded, “Does he want to have government closed forever?”

Congress must pass an appropriations bill to fund the government before the year’s end. Failing to do so will cause a partial government shutdown, reports Conservative Review. (Videos Below)

President Trump on Tuesday, pledged to take responsibility if the government shuts down, adding he would be “proud to shut down the government for border security.” Further, he insisted that Democrats fund the wall or face consequences.

(Related Article: Tomi Gives Kudos To Pres Trump After Standing Up To Chuck & Nancy: ‘That Is The Man I Voted For!’)

One thing is for sure, President Trump will not back down. Democrats will eventually cave and have to face angry voters. That day will be glorious, but democrats know it will happen. It’s time to protect our borders and the safety of Americans. (Videos Below)

Nancy Pelosi: “We’re not going for the 5 billion dollars for the wall. We simply are not.”

Nancy Pelosi: "We're not going for the 5 billion dollars for the wall. We simply are not." https://t.co/2BhSH7cfaD pic.twitter.com/zPs8FTX9fm

Then, she predicts the government will stay “closed forever” because she is never going to fund the border wall.

Pelosi predicts the government will stay "closed forever" because she is never going to fund the border wall.

Earlier, Pelosi said she is not going to approve one dime for the Wall. pic.twitter.com/W1hDuOtikw

Four Lawmakers Send Urgent Letter To Trump Regarding The Southern Border: ‘Immediately Use Your Authority’