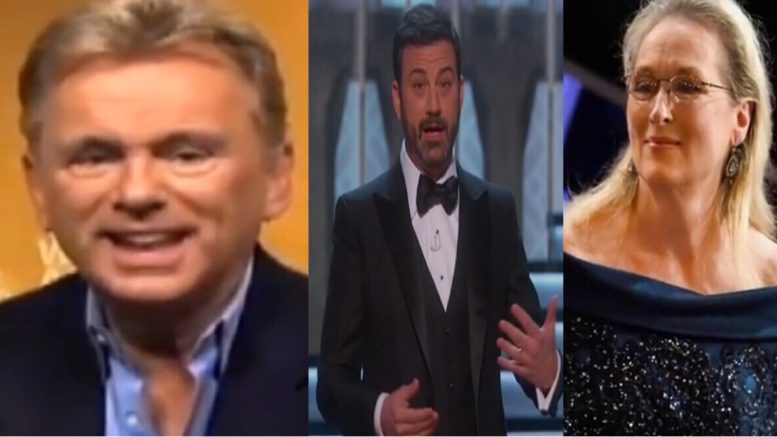 Pat Sajak has a brilliant suggestion for the impending forlorn Oscar night. Specifically, he recommends turning it into two nights!

Hollywood is folding in on top of itself…with it’s latest trauma over who will host the February 2019 Academy Awards since Kevin Hart stepped down. (MORE BELOW.)

Pat Sakak offers a quick fix for movie stars who insist on inserting themselves into politics.

Sajak tweeted a hilarious response to the melt down Hollywood is having over Kevin Hart’s “…previously tweeted homophobic comments. And used such material in his stand-up act,” as reported by Michael Phillips of the Chicago Tribune.

“Some of the feedback received,” Phillips wrote, has been “‘the problem‘ is the stifling, oppressive guilt culture promoted by academia, Leftists and [the] media..”

The producers, Donna Gigliotti and Glenn Weiss of the 91st Academy Awards or Oscars are beside themselves. They simply do not know what to do!

Sajak steps in with an ultimate FIX-ALL. In an hilarious thrown down, he tweeted, “Here’s a quick fix for the Academy Awards show: expand it to two nights. On the first night, give out awards, and celebrate the history and wonder of movies. On the second night, hold your political rally.” (MORE BELOW.)

Sajak sticks it for the WIN!

Pat Sajak probably has done the Oscar producers a great favor for such a brilliant solution since last year their ratings hit an all time low as they insisted on politicizing the event.

Variety reported, “the 2018 Academy Awards telecast on ABC attracted 26.5 million viewers across the nearly four-hour show on Sunday night,” then hit the heart of the matter and stated, “as it stands, the 2018 Oscars are down approximately 19% compared to 2017.” BOOM! Sajak has it RIGHT! Let our stars be STARS and NOT politicians.