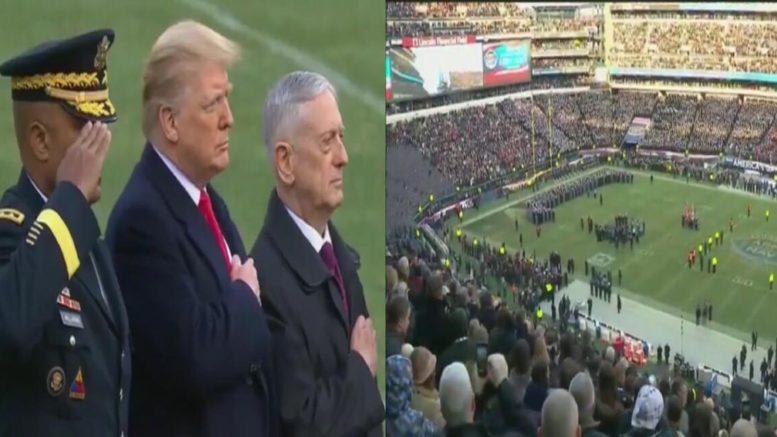 President Trump attended the Army vs. Navy football game Saturday where he exclaimed what a great honor it was be attending.

Further, the President was joined by Secretary of Defense Jim Mattis (Mad Dog) where they kicked off the start of the annual game in Philadelphia. (Videos Below)

The Commander in Chief took part in the annual Army vs. Navy game where it marked the 119th time the two teams have met.

President Trump was giddy as he participated in the national anthem and coin toss taking the field at Lincoln Financial Field.

The audience was filled with Midshipmen of the Navy, West Point cadets and other active duty and military veterans. (Videos Below)

During the military chaplain’s prayer before the game he said, “In this game every player on the field is willing to die for every person watching.”

The crowd cheered as President Trump stepped onto the field before the game and the student choirs of both military academies joined together to sing the National Anthem. It is perhaps the most beautiful rendition you will ever hear. (Videos Below)

WATCH THE TWO VIDEOS BELOW:

God bless America. God bless our men and women of our Armed Forces!

The Army-Navy joint rendition of the National Anthem is perhaps the most beautiful rendition you will ever hear.

It will give you chills 🇺🇸

God bless the young, kickass men and women of our Armed Forces. pic.twitter.com/rfIIXueTrp

“In this game every player on the field is willing to die for every person watching.”

The military chaplain's prayer before the Army Navy game:

"In this game every player on the field is willing to die for every person watching."

President Trump tweeted a picture of the stadium before landing for the game and wrote, “Great honor to be headed to the Army-Navy game today. Will be there shortly, landing now!”