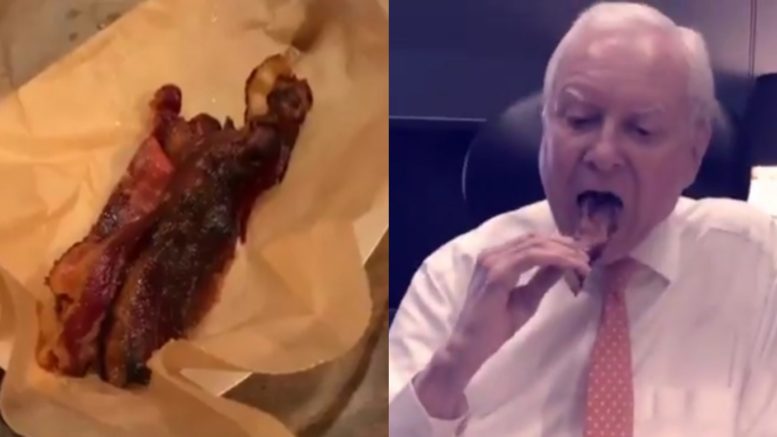 Senator Orrin Hatch is enjoying his last days in office by having a little bit of fun trolling on social media.

The senior Republican Senator from Utah is due to retire after 42 years of service. And on Tuesday, he gave America a classic reminder that his replacement, Mitt Romney, has some big shoes to fill in terms of his witty personality.

Hatch responded to an article by Independent that they tweeted out with the title, “Phrases like ‘bringing home the bacon’ could be banned to avoid offending vegans.”

The article claims idioms that vegans and animal rights groups think promote violence to animals could be made obsolete in society.

According to Independent, such groups are pushing schools to stop teaching idioms such as “killing two birds with one stone” or “beating a dead horse” cause they think it promotes violence to animals. Their hope is that, over time, society will refrain from saying such words.

Like many Americans, Hatch loves his bacon. And he found the perfect way to show what he thinks about Vegans taking offense to well-known idiom “bringing home the bacon.”

In a response to Independent’s article, Hatch tweeted a video of himself with the song ‘Oh Yeah’ by Yello in the background and a plate of fresh-cooked bacon.

Orrin is then seen eating the bacon and commenting how tasty it is. It was quite the savage response. Video Below