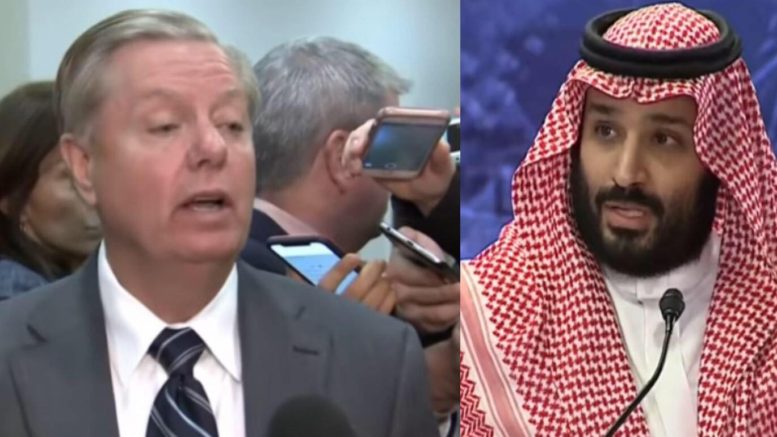 On Tuesday, Senator Lindsey Graham (R-SC), said during a press conference that he believes Crown Prince Mohammed bin Salman is guilty of the murder of Jamal Khashoggi after he received a briefing from CIA Director Gina Haspel.

At the request of Sen. Graham, Haspel briefed a some lawmakers from both sides of the isle. Several senators wanted to hear from Haspel after she was excluded from a briefing on Saudi Arabia last week that was conducted by Secretary of State Mike Pompeo and Defense Secretary Jim Mattis. (Video Below)

Haspel’s CIA conducted an investigation that found the crown prince, known by the nickname MBS, knew about the killing at the very least and may have ordered it. Khashoggi was murdered in October in the Saudi consulate in Istanbul and was reportedly dismembered, via The Washington Examiner.

“MBS the crown prince is a wrecking ball. I think he is complicit in the murder of Mr. Khashoggi.” Sen. Graham said.

The South Carolina Senator explained that he is working on a bipartisan statement to issue by the end of the year “that in fact the crown prince was complicit in the murder of Mr. Khashoggi, that during his tenure as the crown prince he has put the region in chaos and has undercut the relationship.”

Further, he added that he won’t support arm sales to Saudi Arabia “as long as he is in charge of this country.” (Video Below)

After CIA’s Briefing, Sen. Graham Comes Down ‘Like A Ton Of Bricks’ On Saudi’s Crown Prince

Senator Lindsey Graham called the murder of Khashoggi “beyond my sharing it with you,” and “one of the most brutal acts one could imagine and it says a lot about him as a person.”

“I think Secretary Pompeo and Mattis are following the lead of the President. There’s not a smoking gun, there’s a smoking saw,” he declared.

“You have to be willfully blind not to come to the conclusion that this was orchestrated and organized by people under the command of NBS and that he was integrally involved in the demise of  Mr. Khashoggi. Graham added. (Video Below)

Senator Graham also pointed out that open source reports showed that he had been focusing on Mr. Khashoggi for a very long time.

Graham emphasized, “It is zero chance, zero, that this happened in such an organized fashion without the crown prince!”