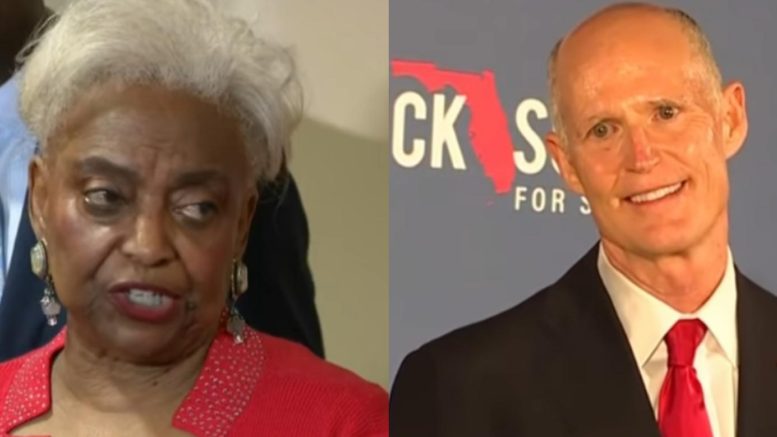 Brenda Snipes, the embattled Supervisor of Elections in Broward County Florida resigned from her position due to the 2018 midterm voting chaos created under her watch.

After Snipes resigned;however, Governor Rick Scott SUSPENDED her. Snipes rescinded her resignation letter and vows to take the Governor to court! (VIDEO BELOW.)

Snipes was suspended for INCOMPETENCE.

And she is not the ONLY Broward County of Elections supervisor to be caught doing odd things with the votes.

And you will never believe who prosecuted Oliphant. Peter Antonacci was the Attorney who represented the Governor. Antonacci, “prosecuted the 2004 Senate hearings against” Oliphant. And now Antonacci has Snipes’ position. (VIDEO BELOW.)

Snipes was to receive a pension package which would include about 11,000 dollars per month for life. However, now that she has been suspended – the pension may be at risk.

Brenda Snipes’ Attorney said about the suspension, “We believe it’s a malicious action that should not have happened,” she said, adding later that “all of the voters of Broward County should be concerned,” as reported by the Sun-Sentinel.

Scott fired back with “taxpayers should no longer be burdened by paying a salary for a supervisor of elections who has already announced resignation.” He said Antonacci would “be solely focused on running free and fair elections, will not be running for election and will bring order and integrity back to this office.” (VIDEO BELOW.)

WATCH THE VIDEO BELOW.

After Blaming Repubs for the ‘Prolonged’ Pandemic, Swalwell Gets Caught Maskless in Miami, FL