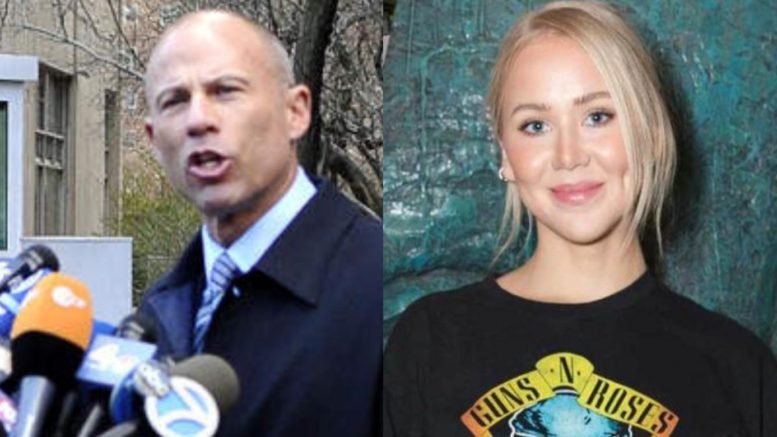 Avenatti and his partner at odds with second allegation. Photo credit to US4Trump compilation with D-Listed, ZeroHedge.

Well, well well. Democratic Presidential hopeful for 2020, Michael Avenatti was just slapped with a SECOND allegation of being ultra violent.

Miniutti claims she tried texting a friend for help, but claims Avenatti grabbed the cell phone. The actress says he remained very close to her and she was afraid for her safety.
Avenatti then allegedly grabbed her by the arm and dragged her out of bed, on the floor and through the apartment and out the front door into the hallway. Miniutti claims she was injured while being dragged, and provided pictures of her alleged injuries in her court filing.

The actress says she was in her underwear and also suffered scratches to her back. After being dragged into the hallway, Miniutti says she began ringing a neighbor’s doorbell until Avenatti allegedly ran out and pulled her back into his apartment.

She says she then put on pants, and ran out of the apartment to a nearby elevator, and was followed by Avenatti. She says the attorney begged her, “Don’t do this Mareli, don’t involve them.”

Miniutti says she told security about the alleged attack, and had a friend pick her up for the night. At her friend’s house, the actress says she noticed red marks on her body, and called police to report the incident.

She claims she showed back up to Avenatti’s apartment the following morning and was let in by security. Avenatti also showed up, and Miniutti explains she was told he had been arrested and then provided her statement to detectives.

Brietbart further said, “The young actress alleges the violent incident is the second time the lawyer has been physical with her.”

It appears, Avenatti treats women with a great deal of disrespect. Yet, he accused Mareli of disrespecting him.

Brietbart reported, “Miniutti says Avenatti commanded her not to ‘disrespect’ him and ordered her not to sleep in his apartment that night.”

Avenatti wishes to have due process after not granting it to Supreme Court Nominee, Brett Kavanaugh.

He wants everyone to believe HIM and not HER.

In a tweet, Avenatti wrote, “I look forward to a full clearing of my name and disclosure of all of the facts. I have NEVER abused a woman or committed domestic violence against anyone. Any claim to the contrary is completely bogus and fabricated. I am a target. And I will be exonerated.”

Well, if that isn’t the pot calling the kettle black. Who do you believe? (See tweet below.)

I look forward to a full clearing of my name and disclosure of all of the facts. I have NEVER abused a woman or committed domestic violence against anyone. Any claim to the contrary is completely bogus and fabricated. I am a target. And I will be exonerated.